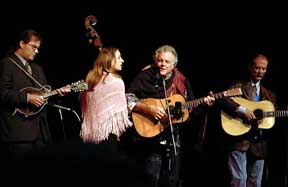 Two of the most influential musicians in American bluegrass music

From acclaimed musical theater favorites sung by Colm Wilkinson of "Phantom of the Opera" and "Les Misérables" to the soul-stirring gospel of the Grammy-winning Blind Boys of Alabama to a top-notch conductor-less string orchestra, the 2005-2006 Goshen College Performing Arts Series will again feature performances from diverse musicians and musical styles for Michiana audiences, with ticket sales beginning July 15.

A deep love of musical literature is the driving force behind the Tokyo String Quartet that motivates each brilliant performance.

From the spontaneous and toe-tapping melodies of the Lincoln Center Jazz Orchestra and Wynton Marsalis to the graceful classical performances of the Wroclaw Philharmonic, the 2004 -2005 Goshen College Performing Arts Series will once again bring performers from all over the world and a wide variety of music genres to Michiana audiences.

If you'd like to expand your knowledge of Scottish music beyond the soundtrack to "Brave Heart," Bonnie Rideout's concert at Goshen College may be just what you're looking for.

One of Latin America's leading quartets will be playing at Goshen College on Jan. 22 at 7:30 p.m. in Sauder Concert Hall as part of the 2003-2004 Performing Arts Series, though the concert was nearly replaced with a backup group due to security clearance problems experienced by two members of the quartet.

One of the top bluegrass bands in the country will be playing at Goshen College on Jan. 17 at 7:30 p.m. in Sauder Concert Hall as part of the Performing Arts Series.

Goshen College offers another great series for the seventh year of the Performing Arts Series. Continuing in the commitment to bringing accomplished performers from a wide variety of music genre to our stage, this year's line-up ranges in musical styles from orchestral to Cuban to bluegrass to Scottish.