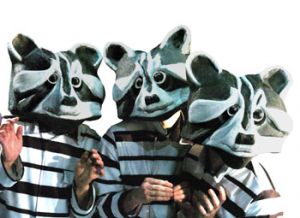 Tickets cost $30, $20 and $15 and can be purchased through the Goshen College Welcome Center by calling (574) 535-7566, emailing welcomecenter@goshen.edu or online at www.goshen.edu/tickets.

Zoo Zoo is penguins playing musical chairs, a cat trapped in a giant paper bag, hippos with insomnia, anteaters as waiters and a madcap revue of illusion, comedy and fun that has inspired audiences nationwide. The show’s universal themes are presented with a light touch, as animals take on human characteristics and inanimate objects spring to mischievous life.

Zoo Zoo is performed without words to an original score by Katie Griesar, and is comprised of a series of short works lasting in length from four to seven minutes. Each work plays on the anthropomorphic realization of animals and inanimate objects. A cast of five plays a multitude of characters ranging from fireflies to giant polar bears in a show that appeals to ages 4 to 104.

Founded in 1979 by Carol Triffle and Jerry Mouawad, Imago Theater’s original productions have toured internationally for over two decades. The universal nature of Imago’s work has won audience and critical acclaim in tours across Asia, Europe, Canada and the United States. The New York Times called the theater’s work “a mastery of mime, dance and acrobatics.”

From adaptations of classics to excursions into vaudevillian existentialism, Imago’s repertoire is as vast as the forms they shape. With commissions for stage, film and television, Imago blurs the lines of the expected to break new ground, exploding performance boundaries, yet maintaining humor and humanity.