For the past two summers, Goshen College Assistant Professor of American Sign Language Myron Yoder has taken small groups of students to Jamaica not to discover the island's well-known beaches but to connect with a school for Deaf children and youth.

Baltimore Consort, the sextet that will take the Sauder Concert Hall stage at Goshen College on Feb. 12 at 7:30 p.m. as part of the 2004-05 Performing Arts Series, will look and sound different than most modern musical groups. Baltimore Consort was founded in 1980 to perform specifically the instrumental music of Shakespeare

David Wright, a professor at Wheaton College and the author of two poetry collections:

Trumpet performer Martin Hodel with Kent McWilliams at the piano will inaugurate the Goshen College Chamber Music Series in Rieth Recital Hall on Jan. 29 at 7:30 p.m. A reception in the Music Center lobby will follow the concert.

Leslie Bentley, president of Pedagogy/Theatre of the Oppressed, is the Roy H. Umble Master Class in Theater lecturer and teacher and will speak at Goshen College on Jan. 25 at 7 p.m. in Umble Center on The Courage to Be Happy: Augusto Boal and Democratizing Theatre. A reception will follow.

Leslie Bentley, president of Pedagogy/ Theatre of the Oppressed, is the Roy H. Umble Master Class in Theater lecturer and teacher and will speak at Goshen College on Jan. 25 at 7 p.m. in Umble Center on 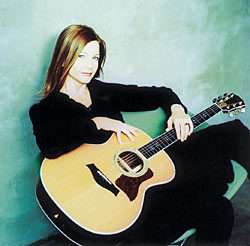 The Goshen College campus has changed a lot since Carrie Newcomer was a student in the early 1980s. But the sing-songwriter will find many fans in the area happy to welcome her back to her old stomping grounds to perform at Goshen College in a venue very different than the performance halls of her student days.

Goshen College Music Department faculty members will present a recital of chamber music as part of the 2004 -05 Faculty Recital Series on Jan. 21 at 7:30 p.m. in Rieth Recital Hall.