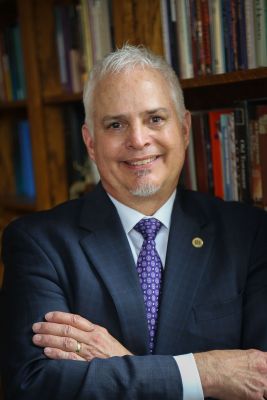 Educator, visionary, ancient near east scholar, biblical theologian and church leader, Dr. James E. Brenneman became the 16th president of Goshen College in 2006. As president of Goshen College, Brenneman’s vision for the college includes it becoming more diverse, more sustainable and more known for the ways students and alumni are making a positive difference in the world.

As a child growing up, going to school and church in the historic Cuban quarter of Tampa, Florida (Ybor City) and living most of his adult life in Los Angeles, his commitment to making known and ensuring the positive influence of Hispanic culture in the U.S. story has been a driving force in his life. After coming to Goshen College, he launched the Center for Intercultural Teaching and Learning (now the Center for Intercultural & International Education) in 2006 upon receiving a $12.5 million grant from Lilly Endowment Inc. While he was president, the percent of traditional undergraduates who are Hispanic grew from 5 percent (2006-07) to 18 percent (2015-16). Brenneman became the second Indiana college president to sign the American College & University Presidents’ Climate Commitment to work toward a carbon neutral campus in 2007 and was invited by the White House to participate in the American Campuses Act on Climate roundtable in November 2015. The college added its first master’s degree programs: M.S. in Nursing (2007), M.A. in Environmental Education (2008), M.A. in Intercultural Leadership (2013-16) and The Collaborative MBA (2014). In 2011, Brenneman helped launch three institutes on campus: the Institute for the Study of Global Anabaptism, the Institute for Ecological Regeneration and the Institute for Latino Educational Achievement. In 2012, the general education program called the Goshen Core was overhauled to focus on intercultural, international, interdisciplinary and integrated learning. Brenneman was reappointed for his second term in 2010 and for his third term in 2014.

Dr. Brenneman served as an active board member of the Economic Development Corporation of Elkhart County and the Horizon Educational Alliance, a county-wide educationally focused coalition focused on pathways to college and career readiness. He also served on the boards of the Independent Colleges of Indiana, the Hispanic Association of Colleges and Universities and the Council of Independent Colleges. He is chair of the Council of Presidents for the NAIA Crossroads League.

As a Goshen College student, Brenneman pursued an interdisciplinary degree, combining Bible, biology and natural science, and graduated in 1977. He went on to attend Associated Mennonite Biblical Seminary (now the Anabaptist Mennonite Biblical Seminary) and completed a master of divinity degree from Fuller Theological Seminary. At Claremont Graduate University, he earned a master of arts degree in religious studies and a doctorate, with a focus in Hebrew Bible/Old Testament studies.

Brenneman is an ordained minister of Mennonite Church USA and was the founding lead pastor of Pasadena (Calif.) Mennonite Church where he served for 20 years. Prior to that, he was a senior associate in leadership development for U.S. Ministries of World Vision from 1983-1986. For fifteen years, he also served on the faculty at Episcopal Theological School at Claremont (Calif.) in Old Testament scholarship. Brenneman authored “On Jordan’s Stormy Banks: Lessons from the Book of Deuteronomy” (Herald Press, 2004) and “Canons in Conflict: Negotiating Texts in True and False Prophesy” (Oxford University Press, 1997), and has written numerous book chapters and articles on theological and church-related themes. An experienced public speaker, he has delivered dozens of lectures and presentations on a variety of topics related to his scholarly interests and pastorate.

Brenneman’s wife Dr. Terri J. Plank Brenneman is a clinical psychologist and also a 1977 Goshen College alumnus. They are the parents of son Quinn.