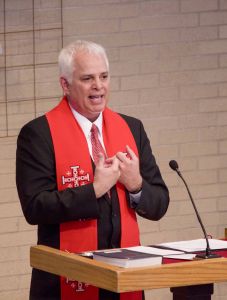 Baccalaureate sermon, (as prepared for delivery) by Dr. James E. Brenneman, president of Goshen College on Sunday, April 27, 2014 in the Goshen College Church-Chapel

So says the Psalmist. So says the prophet Jeremiah. So says your President, your teachers, your family and friends. Happy are you, whose hearts are set on God’s pilgrim-way.

The journey to this day began more than two decades ago for most of you graduates. Perhaps, for many of you, it was memorialized forever in two tiny footprints molded in plaster, hung with a bow above your crib. Those two tiny little feet have grown to carry you at least 28,750 walking-miles so far to this very day, the day of your commencement. Happy/blessed are you, indeed. Happy/blessed are we, who have walked with you “on the pilgrim’s way.” By the way, most of you still have another 86,250 walking-miles to go!

The theme selected by your peers for this year’s baccalaureate service speaks of footprints as evidence of history and promise of a hopeful future.

I love that image. Footprints are, indeed, evidence of the past. Every single one of us here today arrived by walking in the footprints of many who have walked this pilgrim way before us. A number of years back, archaeologists discovered beneath layers of beach-sand in “laminated sediment” on the northern shore of the English Channel, 15 pairs of footprints of all different shapes and sizes. They dated the footprints to well-over 800,000 years old. Perhaps, these prints captured a family on an afternoon outing familiar to us all these years later.

Fast forward to other more recent trackways like “El Camino de Santiago” in Spain that retraces the steps of countless pilgrims for thousands of years. Just last year, our own Professor of Spanish and Faculty Chair, Dean Rhodes, walked all 500 miles of El Camino de Santiago (barefoot – not really). Collar him sometime to give you the Readers’ Digest version of that trip: at once painful, monotonous, exhilarating and holy. Whether from the King’s Highway starting from southern Egypt along the Jordan Valley, across the Fertile Crescent to modern day Iraq, or the spice-laden Silk Road to China, you and I are late comers walking in the footprints of so many others, too many, to name, today. You have big shoes to fill, but do not hesitate to step into the sure footprints left by those you love and trust – your ancestors, professors, parents, and mentors.

As evidence of history, footprints of past pilgrims may serve as guides, but that cannot be the end of the story for you. It is also the case that your very own footprints leave trace evidence for others of where you’ve been. You bear some responsibility to leave some clues for others to learn from. What the poet, Ross MacDonald, challenges his fellow writers to do, can just as easily be applied to you newly minted graduates:  “as you work your way deeper into your craft, learn to drop more and more personal clues. Like burglars who secretly wish to be caught, leave your fingerprints on broken locks, your voiceprints in bugged rooms, your footprints in wet concrete.” Your footprints in wet concrete.

That doesn’t mean you must simply and forever walk the road of predictability. God forbid, if you always walk the straight and narrow and only in the footprints of others, never taking risks, making no footprints on the ceiling, no dancing in the dark, no tip-toeing through the tulips, or leap-frogging over toad stools. If all your footprints are straight forward in one direction, then I’m not sure you are necessarily hearing the voice of God. Remember, God called Abraham and Sarah to “walk on the wild side” (in Hebrew: Lech-lekah meaning “Get up and go!). They were called to leave all that was familiar and safe to journey to an unknown land faraway. They were the ancient near-east version of Frodo and Sam taking their own perilous journey from Bag End (The Shire) to Mount Doom (Mordor). Both journeys, by the way, were almost the exact same distance.

Sometimes God’s call may seem upside down, and foolish, even an absurdity – like finding evidence that an elephant has been in your refrigerator because its footprints are in the butter.  God just may call you to something like the Ministry of Funny Walking in that old Monty Python sketch or call you to leave odd footprints in the fields of the Lord that go against the grain of expectation like Pope Francis refusing to wear the satin cassocks and red leather shoes of the regal pontificate.

I expect that some, perhaps, many of you, like Pope Francis, will be called to prestigious positions, too. Like GC alums before you, you will be called to lead a world-wide church, or start or lead whole companies, to make millions in doing well or to manage one of the largest cities in America or win Emmys or invent patents or be named as one of TIME magazine’s 100 most influential people in the world. The question even then, especially then, when your accomplishments are great will be: what footprints will you leave behind?

Others of you, like other alums before you, will step into hovels, and homeless shelters, in classrooms and churches, in small clinics in foreign lands; a wholly different kind of foolishness, leaving footprints devoid of monetary gain or glorious fame. In those cases, the bean-counters and poll-takers and maybe even you will be tempted to wonder whether your Goshen College education was really worth it after all. Let me assure you that in God’s economy where the last shall be first, and the first last, the return on your investment is priceless.

Just remember, a flourishing life is not about all the steps you’ve taken, or all the places you’ve been, or the money you’ve earned or the acclaim you’ve garnered. In the last analysis, a meaningful life is about the footprints you leave behind.

Literally, before you lie whole beach-heads, sandy deserts, muddy river banks, and blank rasas of wet cement waiting for your unique, quirky, footprints. What a wonderful faith-filled opportunity (even for those of little or no faith) to step out like toddlers, called by God and nature to walk upright, homoerectus, a unique species, stepping forth into an unknown future, a destiny in God’s hands.

When I was in my early teens, I wanted to know with certainty my future. What exact road “in the yellow woods” would be the one least traveled by and would it truly make all the difference for me that Robert Frost’s poem seemed to suggest? At that time, my father gave me some words of advice that have stuck with me ever since – even now when I still want to know, in advance, the steps I should take to a future unknown.

Dad’s advice was simple enough: Take the first step and accept that you will sometimes misstep and fall.  Better that than no step at all.

All of you, trust me, will stumble and fall – you will sometimes leave footprints in the sand that turn to knee-prints or bottoms-up-prints, even whole gouges where you are drug along.  Just remember, especially then, that God’s mercy and steadfast love will never forsake you no matter what.

More significantly, perhaps, the pilgrim’s way of God is sometimes known only in hindsight.  Dad had spiritual proclivities that gave him premonitions or a sixth sense about the future.  I believe he even sensed his own death at an early age. I wanted that kind of intuition! But Dad never even hinted that that sixth sense would be available to me. In fact, he did the opposite. He refused me the comfort of suggesting I might intuit my future steps by way of soothsaying or reading tea-leaves or receiving a prophecy of a particular outcome for my life.  Rather, he insisted on a few short maxims for discerning my next steps:  gather as much information as possible; use my best powers of intuition and, especially, my mind’s reasoning powers; gain counsel from those around me; trust in the knowledge and values learned at home or church or school. And then? Well then, walk or tiptoe, or hop or leap, just “get up and go” into that future, knowing God will always be with me, no matter what. Good advice.

Now, at my age, I can assure you, what he said was true, that if you tap into all the powers of discernment at your disposal and step out in faith, nine times out of ten, when you look back (perhaps, only in looking back) at your footprints, in hindsight, you will gain a sense of your life’s meaning and purpose that could never fully be appreciated, understood or known in advance. You see, “Monday night quarter-backing” – if not done cynically or from the sidelines, can be a wonderful way to practice for a better future.

I once saw a sign at the trailhead in the Great Sequoias, if I remember right, that perfectly expresses our hope for you as you step forth into your future: “Please take nothing but pictures, leave nothing but footprints.”

In just a few moments, an ensemble will come sing the Ghanaian spiritual Woyaya – one of my absolute favorite pieces this year that will be embedded in my heart and soul for many years to come.  It captures the longing, the mystery of unknowing, the struggle, the courage, the hope that no matter how long the journey, together, “We will get there. We know we will.”

And so, today, we send you forth with joy!  We are proud of you beyond measure!  And even though we can’t know your future, or how long the journey will be – we send you in confidence! For we know even now that the footprints you leave behind – perhaps only to be discovered some 800,000 years hence in a muddied petrified estuary – have been shaped by the core values of your alma mater and will evidence the truth that, indeed,  “Blessed are they, whose footsteps walk in the way of the Lord.”  Woyaya! You will get there. We know you will.  Amen.

You ask me where these feet have stood.
I’ll tell you: they have touched un-swept carpet
in uniform rooms, they have tapped along
to the rumbled undercurrents of a train,
caught the imprint of a bike pedal
in glassy night. They have hurt and stung
with dance, they have known woods
and gravel crunch and bare floor,
they have felt notes sing inside their veins,
they have left and returned.
They have toughened, followed roads
in foreign lands, across mountain cliffs
and camel-pocked deserts, they have returned,
they will leave. When we walk it is not
the insignificance of our lives we are afraid of
but their magnitude. We are like wineskins in a smoke,
but are made sweeter by our calluses.
Do not stand too still.
You ask me where these feet are going
and I’ll tell you: I don’t know
how much we will love,
or what or when or where
I don’t know how deep our roots will tangle down
or how many times we will stand on cracks
of wet stone in unfamiliar cities,
or if we will long for the sound of a whistle
in the night, but I know our bodies will carry us.
We will string across great distances,
we will not walk blameless or breathless,
but halting, finding the light and the shadow.
We will leave marks, we will forget the path,
we will move and be moved
on this wild, wide earth.