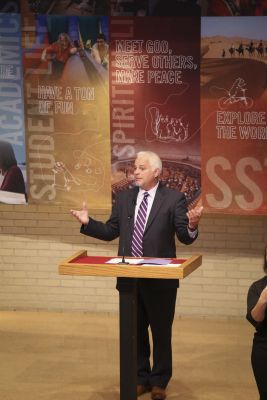 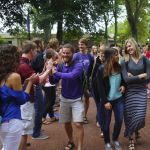 AS YOU KNOW, each year we focus on one core value for the year. Throughout this year, we will be reflecting on the core value of servant leadership.

What does it mean to be a servant? Is that even a good word? It can sound a bit medieval, ancient, even demeaning (KJV: “slave”). On the other hand, perspective matters. I know it’s a great word from the perspective of my cat. I’m sure Jazz, our cat of 21 years, always thought that a human being (like me) was simply the result of millions of years of evolution designed to produce a better cat servant.

We make jokes about being a civil servant, add the world federal, as in federal civil servant, and the negative stereotyping gets worse. I saw a cartoon that showed a person washing his hands at a restroom sink with a big sign next to him on the wall that read: “All government employees must wash their hands of all responsibility before returning to work.” So much for civil servants. And I’m guessing the word “servant” all by itself is rarely even used in your world as students today. Have you ever heard one of your class mates say, “Yo! Hey, guys. . .Won’t You Let Me Be Your Servant?” Hmmm.

And what about leadership? No less challenging. Men and women value very different leadership qualities: a Pew Study shows, on the whole and as leaders, women are more compassionate, ethical and organized, while men tend to be more ambitious, decisive and risk taking. Is “leadership” a neutral word in a Donald-Trump world? Or is being a leader simply the fact you have 13 Twitter followers?

Put the two words together, “servant-leader,” and you can get a real linguistic mash-up. The words can shape-shift in meaning if defined by gender, or class or station in life, even supporting downright painful, oppressive connotations. Whatever does GC alum, now assistant professor of theology and ethics at AMBS, Dr. Melinda Berry, mean by titling her upcoming paper at the Mennonite Education Summit at Bluffton University: “Thinking of Myself as Your Servant leader is a Bad Idea: Mennonite Education and the Problem of the Servant Leadership Paradigm.” Yikes! Can’t wait to hear that paper.

However we define the core value servant leadership, clearly, we must allow for some linguistic flexibility, some interplay of what each word means in juxtaposition to the other, and a certain sense subjectivity not unlike the famous expression of Justice Potter Stewart’s opinion in a 1964 Supreme Court obscenity case, when he said, “we know it when we see it.” We know a servant leader when we meet her or him, we know what servant leadership is when we see it, even if we can’t quite fully describe it for all times and situations.

Today, I’d like for us to focus on this core value, theologically, because all of our core values are centered in Christ. Throughout the rest of the year we will look at the human dimension of this core value.

For Christians, of course, the primary place we derive our meaning for servant leadership is from the life and teachings of Jesus himself. Jesus emphatically stated that those who wish to lead must first serve (Mark 10:43-44). Having said that, let’s be clear, “servant leadership” was not new with Jesus. Jesus got the oxymoron from a much older and deeper source.

Long before Jesus, long before there was even a single human being on earth, long before sheep and oysters and salts and quarks and heat, and light waves and nebulae had even emerged from a primordial sludgy murky chaos (Gen. 1:2) (Heb., tohu va vohu), God, the Creator, did the most amazing act of servant leadership ever known: God attached God’s infinite self to creation, first to the non-human, non-living, formless dark matter, to the void; then to light; then to chemical reactions, to would-be and becoming elements, to this one little corner and to all other corners of God’s universe. In the very act of creating an other-than-God-world, God willingly bridged the existential chasm between creator and created. God connected forever to the universe in its formation and evolutionary unfolding. By entering time and space from eternity, God became permanently enmeshed with this world and hasn’t looked back since. God, in effect, became “Emmanuel” (God with us, before there even was an us). God became the first Servant leader – ever!

Far from being the “unmoved mover” or the “distant watchmaker,” of Western philosophy. Far from being the “Lordly lord” ruling over the cosmos as an emperor, God, instead, entered the circuitry of creation, never to leave. God locked Godself into an intimate, loving, self-sacrificial relationship with you and me forever.

The servant leader God is motivated by love, pure and simple. I can think of no other reason that any God, as traditionally defined, would self-limit in such a way so as to relate to the creation in such a vulnerable way. The servant leader God serves, weeps, suffers, even dies with us, and rises again within the cycles of nature most vividly in Christ. The Servant leader God of love enjoys our accomplishments as they happen, gasps at the singularly unique daily sunsets ever new to both God and us, relishes in the poetic turn of phrase previously unknown and unheard of even by God. The Servant leader God of love is affected by our wrongs, woos us with infinite love – an honest-to-God real love filled with pathos, whimsy, mirth, limitation, creativity, agony and ecstasy.

Like a new parent, when God first saw the divine image emerge in early humans, God breathlessly proclaimed, “Behold, it is very good.” That was God’s way of saying, “Wow!” “Wow!” And nothing has happened since that has in anyway diminished the “Wow” of God’s love for us. Nothing, St. Paul says, can separate us from God’s love. Absolutely nothing. God’s love is above all sacrificial, and sacrificial love is the first sign of a servant leader.

In a minute, Senior Martin Flowers, accompanied on the cello by our new orchestra director and associate professor of music, Dr. Jose Rocha, will perform the wonderful classic “Bridge Over Troubled Waters.” That repeated phrase in the song, “I will lay me down,” poetically and emotionally expresses the sentiment of a true servant leader who embodies Christ’s words; “no greater love than this than she lay down her life for a friend; no greater love than this than he lay down his life for a friend.”

Today, we have considered the meaning of “servant leadership” from the point of view of God, the first servant ever, and from the perspective of a God whose infinite love was made, is still being made, tangible in finite relationship with us and the whole created world. Next semester, in a convocation or chapel, I will consider with you how ‘servant leadership’ rightly defined can be one of the most liberating sources for understanding our core identities as humans, as well. I hope to show how our sense of self, our joy, our meaning in life, and our ultimate self-fulfillment hinges on understanding what it means to be a servant leader. In so doing, I hope to offer a radical corrective to anemic definitions of the modern self. But that’s another day. For now, as we begin this new school year, let’s do our best to serve others above self in any and every way we can and so give witness to the GC core value servant leadership. Thank you.