The recent natural disaster in South Asia has caused many around the world to respond, including the Goshen College campus.

It is a country known for Machu Picchu, llamas and descendants of Incan culture. Goshen College students will now have the opportunity to study Peru in-depth, and engage in service there. 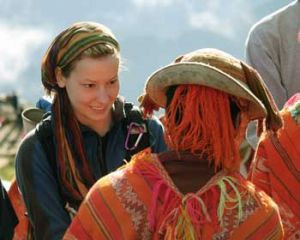 In the just-released 2005 U.S.News & World Report "America's Best Colleges" rankings, Goshen College placed solidly in the third tier of the Best Liberal Arts Colleges category for the fourth straight year and was recognized for program strengths that come from the school's commitment to global citizenship and servant leadership.

Participating in an excavation in the Southwest, trekking through Amazon rainforests in South America and snorkeling through coral reefs in the Florida Keys are just a few of the ways Goshen College students spent their class time during May term.

Julio Ascencio Garcia was glad to welcome an interfaith group of Christian North Americans to his community, and relieved to be inside the cool walls of an old hacienda house while taking a break from his duties on the sunny patio where he and his colleagues rake coffee beans still in husks -- cafe oro -- into piles to dry. In greeting the interfaith delegation arranged by Equal Exchange, the largest fair trade coffee company in the United States, Garcia instinctively linked all Christians as children of God who should share as equals.

In the 2004 issue of U.S. News & World Report "America's Best Colleges" which hits newsstands today, Goshen College ranked 111th in the nation among liberal arts colleges-bachelors, placing it at the very top of the third tier, or quartile, of the 217 other similar schools.

With a hearty laugh accompanied by a customary slap on the table, Dominican Republic President Hipælito Mejia expressed his amusement and pleasure of conversation with Adam Derstine, a Goshen College student from Harrisonburg, Va.