Five Goshen College student speakers will continue the college's near-century- old tradition by participating in the 2006 C. Henry Smith Peace Oratorical Contest on Jan. 17 in Umble Center at 7 p.m. The event is free and open to the public.

Though the story about Goshen College, the Goshen community and attempts to bridge divided perspectives on the Iraq war hasn't been aired on "NBC Nightly News" yet and we wondered if "it ever would, given the minute-to-minute nature of broadcast media." NBC News producers called today to say that the plan is to refresh the story this afternoon on campus and to air it TONIGHT (5:30 p.m. in Indiana, 6:30 p.m. on the East Coast).

Singing and peace come together in 24 Hour Hymn Sing Vigil

Mennonites are known for their a capella hymn singing. They are also known for their peacemaking efforts. For 24 consecutive hours, the two will come together on the Goshen College campus in a hymn sing vigil. 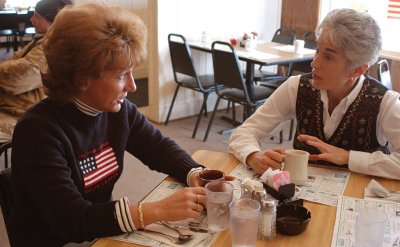 With both anti-war protests and F-16 engines roaring in anticipation of a war in Iraq, timing couldn't be better to sit down and talk with those who shape U.S. foreign policy in the Middle East.-