David Rutter reflects on GC and the National Anthem.

The Anthem debate has already played out at GC. 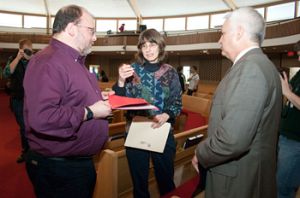 National anthem dialogue and implementation to continue at Goshen College

Goshen College President Jim Brenneman sent the following letter today to the campus community, the Alumni Board and the Parents Council:

Goshen College announced today it will play an instrumental version of the Star-Spangled Banner before select sports events on campus, followed by prayer.