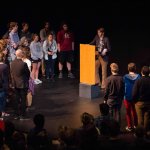 Each participant steps to the lectern to deliver an 8- to 10-minute speech on their chosen topic relating to the Christian peace position, in a universal or specific context, including war and violence, political policies, agencies of justice and peace, peacemaking strategies or current events. The addresses are judged on originality, the integration of topic and a peace position and general standards of delivery.

Participants compete for cash prizes and the top winner may enter the U.S./Canada Mennonite Central Committee-sponsored C. Henry Smith Peace Oratorical Contest. The trust of C. Henry Smith, a 20th-century Mennonite historian and professor at Goshen College and Bluffton (Ohio) College, funds the contest, which gives students an opportunity to become involved with the peace cause while cultivating rhetorical skills. Speech contests have been part of Goshen College’s history since the early 1900s; the C. Henry Smith contest allows the campus and the wider Goshen communities to hear about faith-related, socially relevant, contemporary issues. 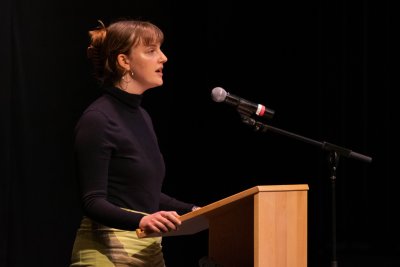 Greta Lapp Klassen, an English major from Goshen, won first prize and $300 in the 2022 C. Henry Smith Peace Oratorical Contest. Her speech was titled “Humanizing Our World, One Walkway at a Time.”

Her experiences biking across the country with the Center for Sustainable Climate Solutions and walking in Elkhart awaiting her car to be fixed made her cognizant of how society prioritizes vehicles over people. “If you aren’t driving a car in 2022, you are not a fully participatory member of our capitalist economy,” she said.

He spoke on his personal experience working in a factory alongside migrant workers. He was able to appreciate the sacrifice that his parents made and other immigrants trying to create a better life for themselves and their families. “This is the reality for immigrants, part of the 546,000 people in the manufacturing industry in Indiana as of 2021,” he said. 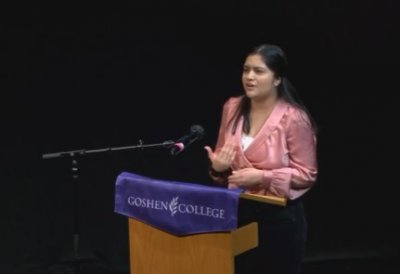 Denisse Aguilar, a  sophomore and Sociology and Psychology major won the top prize in the 2021 C. Henry Smith Peace Oratorical Contest and a $300 prize.

On Feb. 16, her speech titled “Living the American Dream on Borrowed Time,” described her experience as a DACA (Deferred Action for Childhood Arrivals) grantee.  She states “Advocacy creates the ability to demand change, on behalf of individuals who’ve been silenced by an issue.” She revealed part of her story in hopes others would understand the difference advocacy makes in countless lives.

She spoke about our cultural understanding and fear of death, drawing from her experience in Varanasi, India, where Hindu pilgrims celebrate death and then connected death to the ways it has affected our communities and world in the past year causing civil unrest and a result of COVID-19. Miller is a senior from Lancaster, Pennsylvania, majoring in Journalism and English with a minor in International Studies.

Ronit Goswami, a sophomore Exercise Science major from Goshen, won the 2020 C. Henry Smith Peace Oratorical Contest and $500 in prize money on Feb. 18 with his speech titled “Finding Peace in the Trenches: The War on Homelessness.”

Goswami spoke about homelessness around the world and here in Goshen, explaining common causes of homelessness, global statistics and his personal experiences.

Rasoulipour spoke about her experience as an Iranian student living in the United States since the 2016 election.

Emily Stoltzfus, a senior social work major from Goshen, won the 2019 C. Henry Smith Peace Oratorical Contest and $500 in prize money on Feb. 12 with her speech titled “Getting the Words Right: Rethinking our Measures of Education.”

Stoltzfus spoke about how schools measure the success of their students, and that the ways they do this don’t always take all factors into account and can lead to negative outcomes for the students.

Panta’s speech focused on how it can be difficult for people to care about climate change when they don’t feel like they directly experience its effects.

Achieng Agutu, a senior public relations major and spanish minor from Kisumu, Kenya, won the 2018 C. Henry Smith Peace Oratorical Contest and $500 in prize money on Feb. 13 with her speech “The Introduction: A Story of Inner Peace.” Agutu’s speech focused on stereotypes and she shared a childhood story to explain how her father educated her about the stereotypes that she would face from the world.

Taking second place was Mandira Panta, a junior sustainability studies major from Bhaktapur, Nepal. She used elements of humor in her speech titled, “Shades of Injustice.” Panta’s speech focused on colorism and how every country in the world is obsessed with having fair skin.

Yazan Meqbil, a sophomore molecular biology/biochemistry major from Hebron, Palestine, won the top prize of $500 at the annual C. Henry Smith Peace Oratorical Contest with his speech titled, “Beyond Occupation of Mind and Body.” His speech will also be entered in Mennonite Central Committee’s bi-national intercollegiate oratorical contest.

Mimi Salvador, a senior peace, justice and conflict studies major from Ecuador, was runner-up with her speech titled, “Indigenous Motherhood in Defense of Life.” Salvador was also the first-place winner in the 2016 contest. 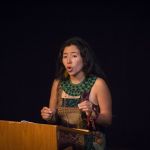 With her speech titled “Privatizing Agony, Protecting Sacred Waters,” junior Noemi “Mimi” Salvador spoke passionately about the privatization of water resources and its effect on indigenous communities. Salvador, who is a peace, justice and conflict studies major from Kitu Cara, Ecuador, won the top prize of $500, which also qualifies her for entry into the bi-national intercollegiate oratorical contest.

Christina Hofer, a senior theater major from Dolton, South Dakota, earned second place for her speech called “Discrediting the Single Story of Islam.” Informed by her experience with a Muslim host family while on SST in Senegal, Hofer encouraged the audience to look beyond stereotypes to see a diverse community of Muslims that includes a commitment to peace, faith and hospitality. 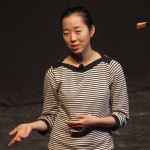 With the topic of “Through the Eyes of the People,”  sophomore Dona Park, who is majoring in both art and interdisciplinary studies, won the top prize of $500 and landed a chance to enter the bi-national intercollegiate oratorical contest.

Morgan Yordy, a first-year history and peace, justice and conflict studies major, received second place and spoke on “Saving the Future: One Girl at a Time.”  Yordy addressed the importance of equal opportunity for and recognition of girls’ education. 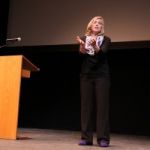 Speaking on “The welcome table: Discussing Goshen College’s hiring policy,” Abby Deaton won the top prize of $500 and a chance to enter her speech in the bi-national intercollegiate oratorical contest.

Martin Hofkamp was runner-up, speaking on “Juveniles in Adult Prisons.” Drawing on his own experiences working with incarcerated youth in Elkhart County, Hofkamp informed the audience of young people who are being tried as adults and their struggles to reach their full potential. 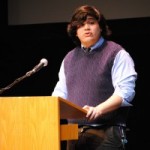 Runner-up Abby Deaton, a sophomore communication and psychology major from Indianapolis, spoke on “Making peace with warriors.” Deaton informed the audience of the rising need for healthcare for returning soldiers and veterans. 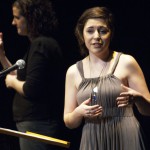 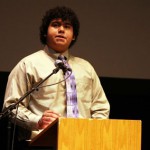 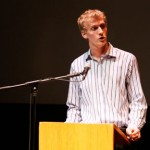 Sophomore Kayla Hooley, undecided major from Peoria, Arizona, won second place for her speech titled “Media Influence on Body Image: How the Media Shapes Our Minds and Divides our Society.” 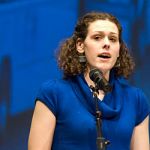 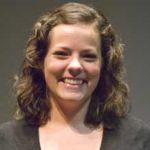 Senior art major Nicole Boyd (Goshen, Ind.) won first place for her speech, “The loss of a childhood: A call to action on pursuing the end of child labor.”