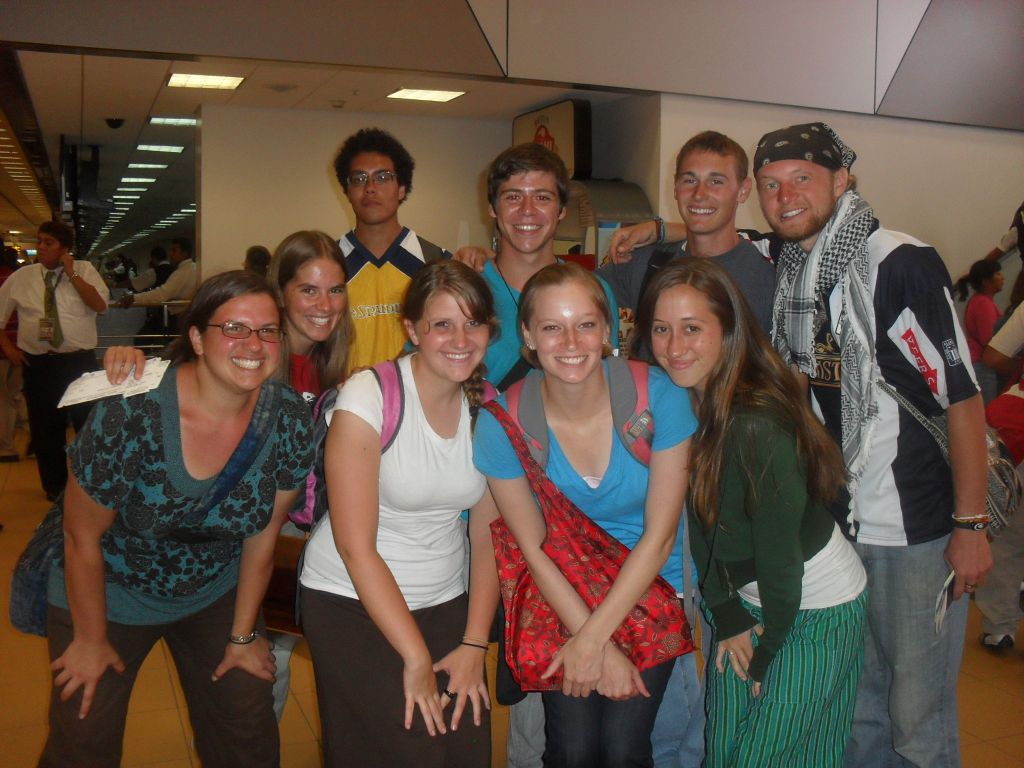 Goodbye, group! Nine of the students in our group traveled to Jorge Chavez International Airport in Lima Tuesday evening to board a jet bound for North America.  The others will spend another week or two traveling in Peru before they return home.  Our goodbyes were filled with… 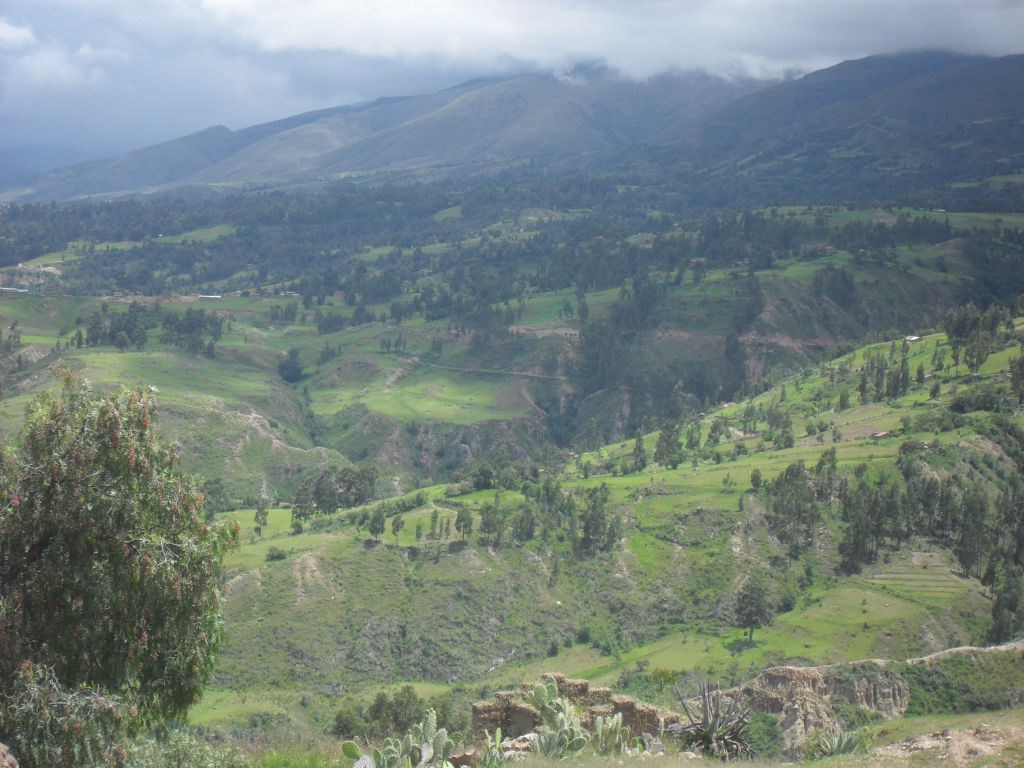 A Student's Reflection on Leaving Service

By Joshua Delp It is still before dawn.  But in the growing half light, I can begin to make out shapes undreamed.  On either side of the road that’s been running downward since before I was awake and before I was asleep there now appear, with increasing reality, svelte… 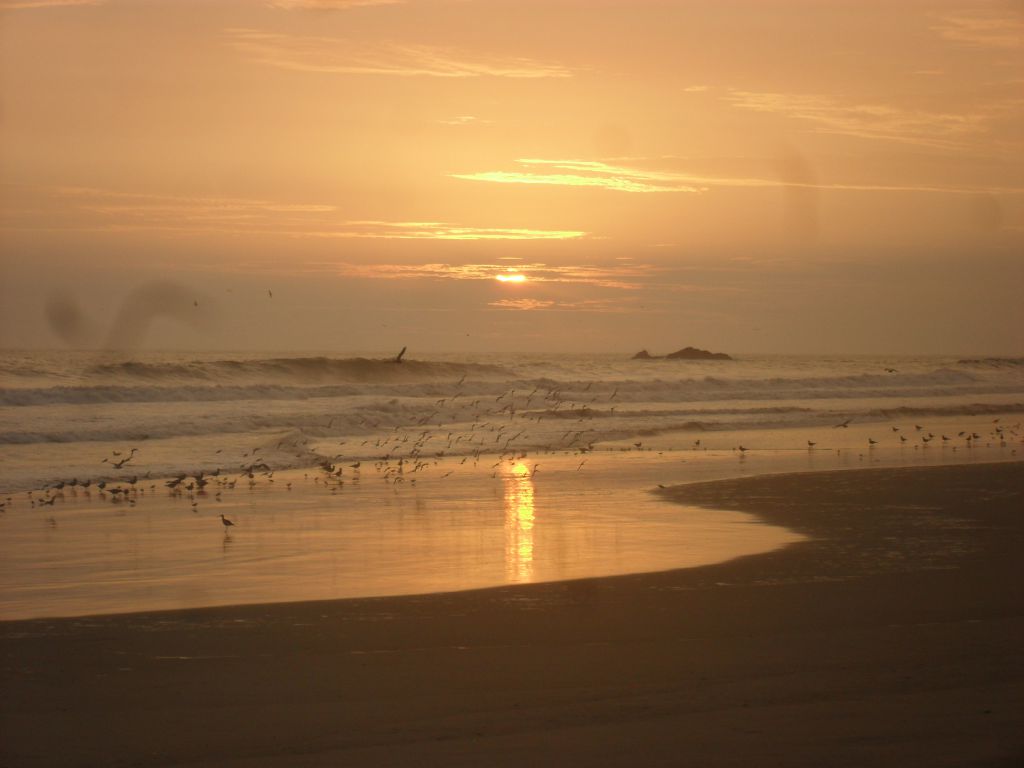 The days ends We finished our program back where it began three months ago — at the edge of the Pacific Ocean.  Kauai is a retreat center operated by the Biblical Union Church, a two-hour drive from Lima.  The facilities include simple accommodations, a meeting area, a… 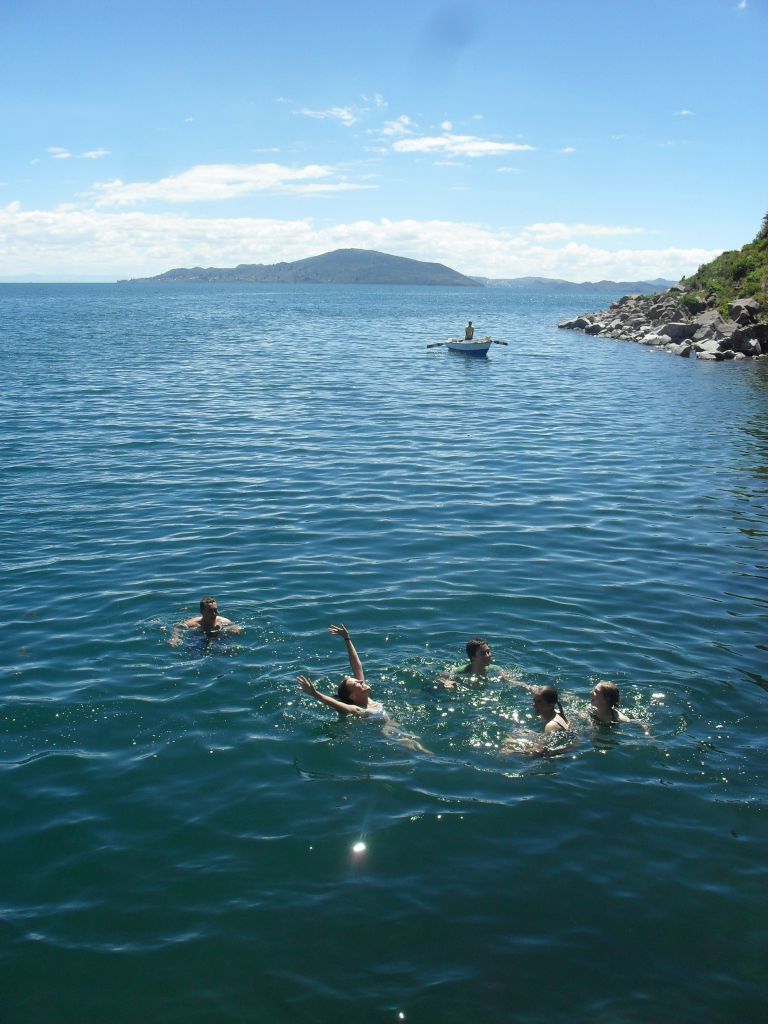 A fond memory When we realized the railroad to Machu Picchu would be closed this season due to heavy rainfall and flooding, the students and directors began discussing alternatives.  We immediately reached a consensus.  If we couldn’t visit the capital of the Inca Empire, we would instead… 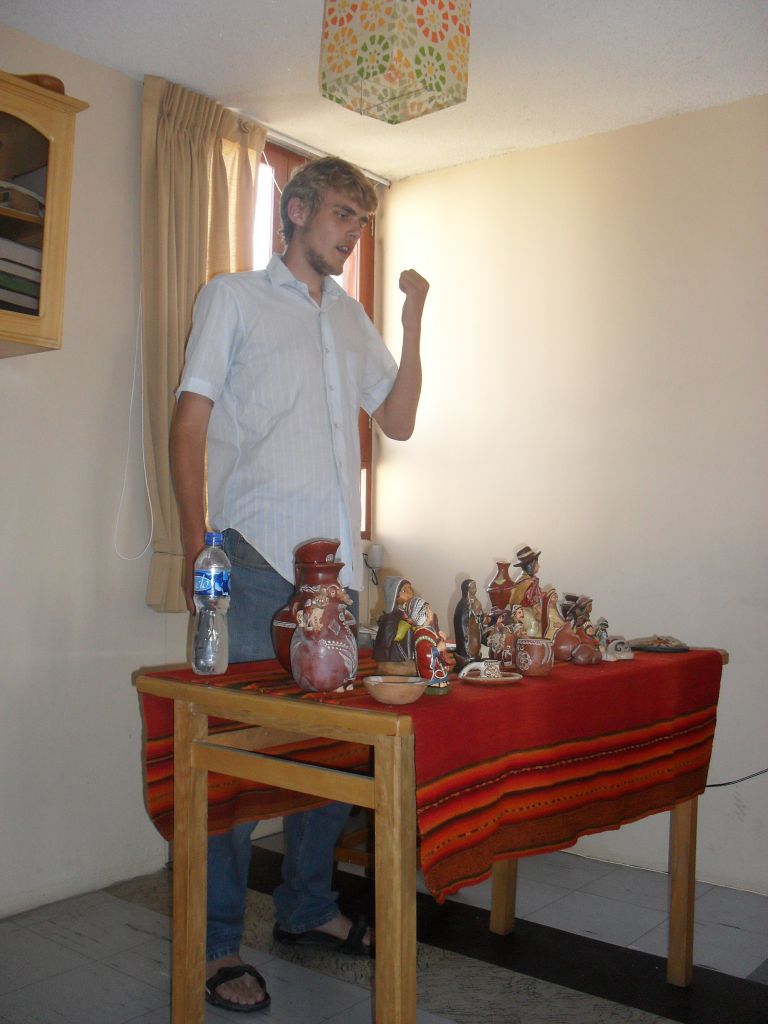 Our students returned to Lima this weekend after finishing their six-week service terms, a happy reunion. While living in the provinces each had an opportunity to research a topic of interest, using personal interviews as their primary source of data.  We began the weekend with a stimulating day of research presentations at Goshen Tambo.  The titles of their presentations reveal a wide variety of topics 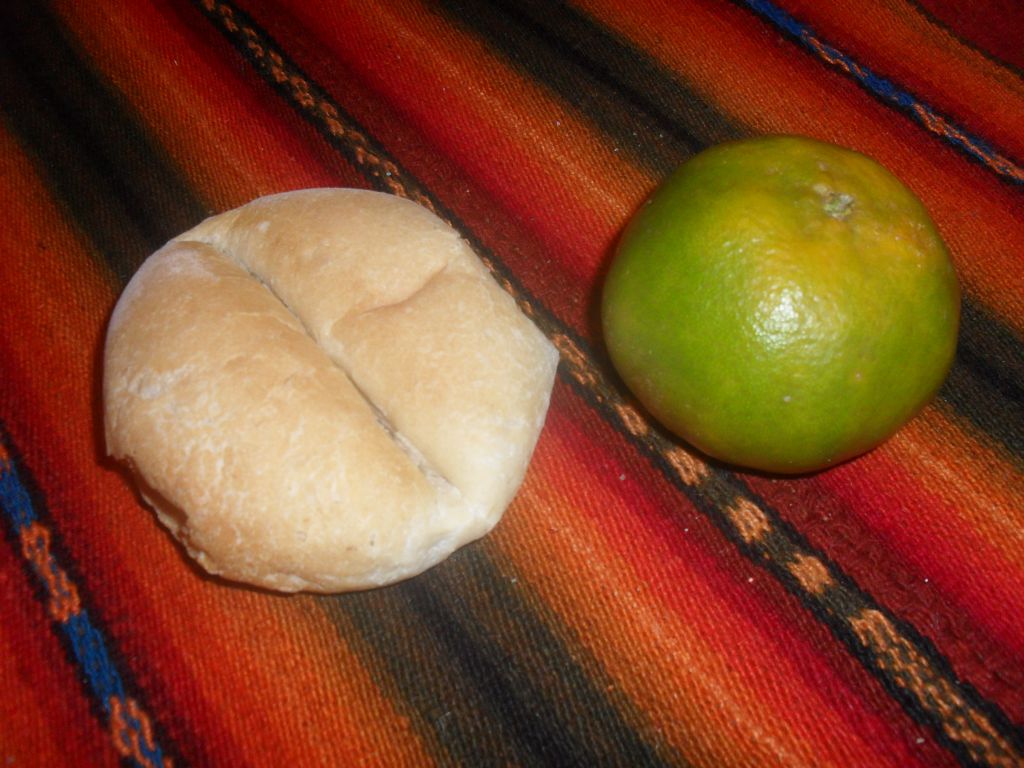 Reflections by Julia Baker: "It was our second day here at Yurac Yacu and we had a lunch invitation. Nancy, one of the Peruvian women that works at The Lazy Dog Inn, was having a birthday and it was being celebrated with a nice lunch, a feast we were of course invited to even though we had never met Nancy. Crowded into Nancy’s dark adobe house we ate together – tin plates piled high with potatoes, a cuy and very spicy sauce. A one-liter coke bottle was passed around and squares of chocolate cake toppled onto the tin plate. For most of the meal I was overwhelmed by the six potatoes in front of me and the spices that made my eyes water and nose run, yet the welcoming smile from Nancy and the clink of forks around the circle felt like such a beautiful community – a communion – that all I could do was smile back. 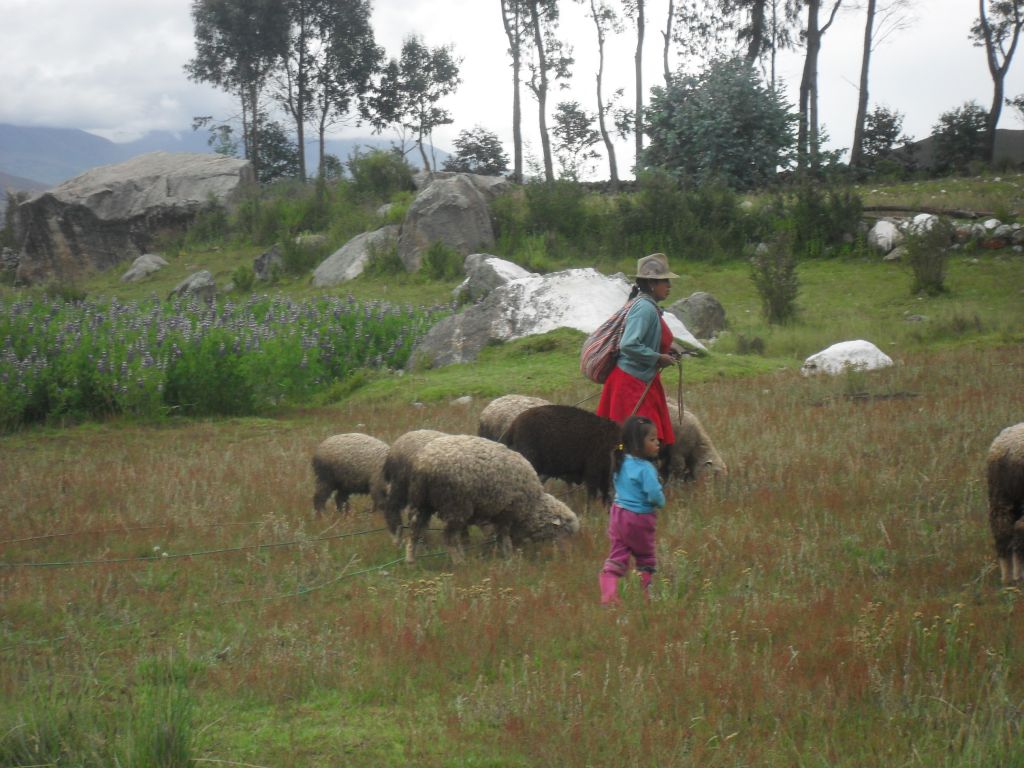 A Student's Reflection from the Yurac Yacu Community

“Colores en Casa” by Julia Baker Standing on the corner of Arequipa and Angamos, I see her, A splash of color against the gray. Hot pink, orange and blue, skirt fanned around her knees. A woven manta, heavy with child, crosses her shoulders. In… 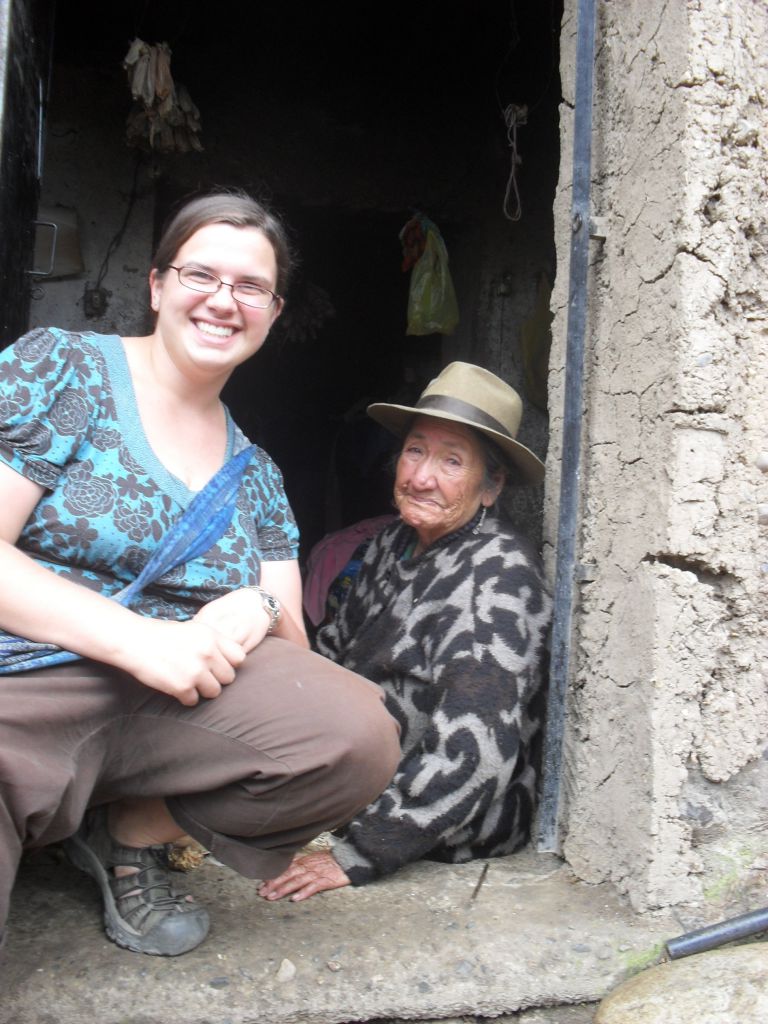 Krista with her host Grandmother There are seven students serving with four organizations in the greater Huaraz area. Sarah and Julia are volunteering for Andean Alliance, a nonprofit organization started several years ago by Diana and Wayne, owners of the Lazy Dog Inn.  Each morning our students leave the comfort of the Inn and walk a bumpy trail to a nearby community of Quechua-speaking farmers.  They work with preschool age children, promoting early childhood development among a population of kids that receives relatively little physical, intellectual and emotional stimulation.  In the afternoons, they devote their energy to teaching English and playing games to help further the development of an eager group of school-aged children.  Julia and Sarah's enthusiasm and love of learning are contagious. 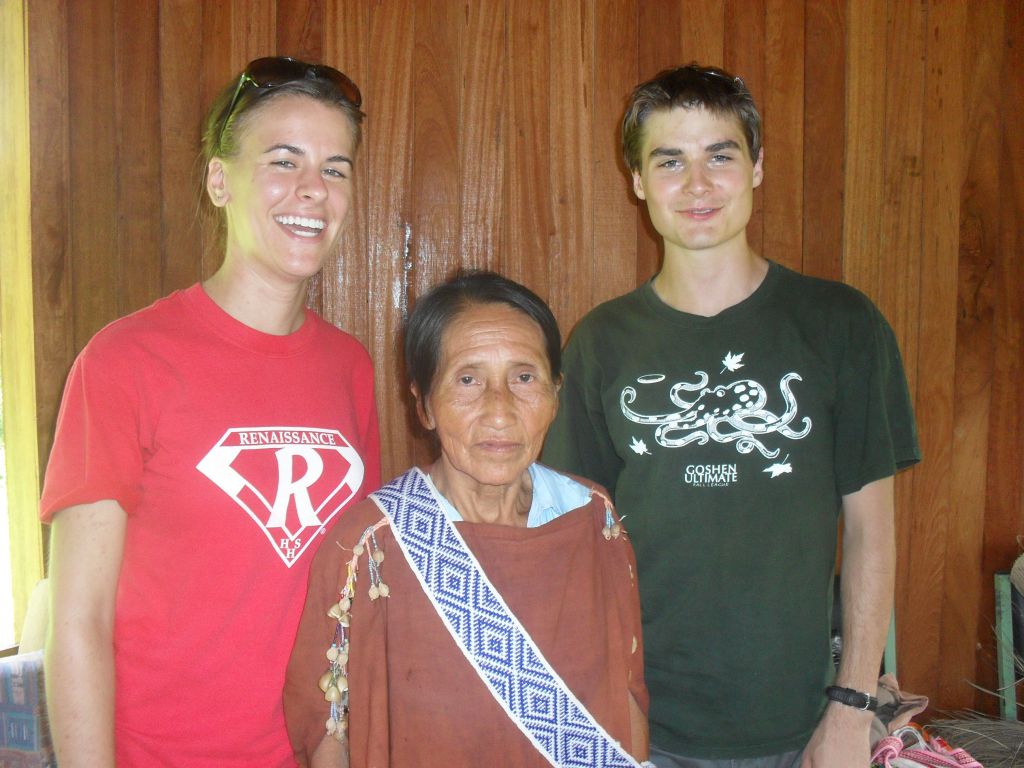 Serving in the Jungle

Two worlds meet Kelly and Micah volunteer for a fair trade company called Chanchamayo Highland Products.  Founder Jose Jorge grew up on a farm and understands how difficult it is for agriculturalists to support their families and provide a better life for their children.  He pays higher prices than most other buyers by insisting that those who produce his coffee beans and rain forest fruit do so sustainably.  But he can only buy as much as he can sell, and thus far his customers are limited to a small segment of the certified organic market in France and Germany.  One of his biggest worries, seldom verbalized, is that desperate farmers will soon turn to the production of coca leaves, a strong temptation given its high price. 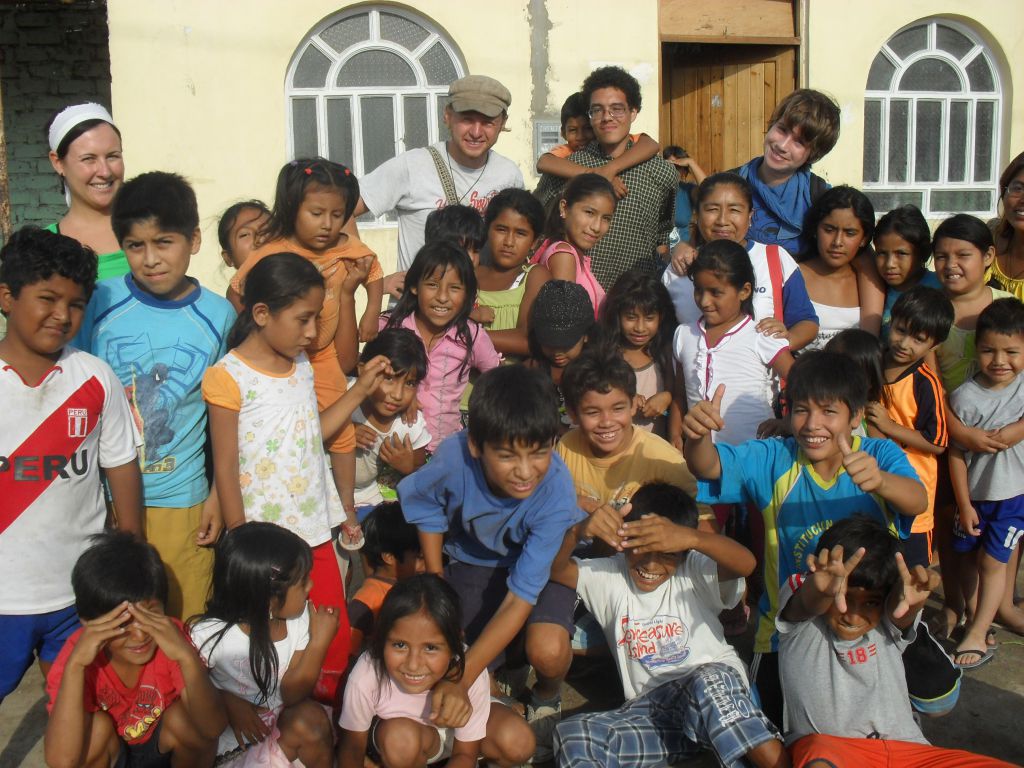 Outdoors at a gang-prevention program Chimbote is famous, both among Peruvians and former SSTers.  Peruvians think of the fish that are caught here, home to some of the best Ceviche on the coast.  SSTers think of Father Jack, Sister Peggy, Charles, Jaime and the hundreds of other characters who perform good words and minor miracles at Our Lady of Perpetual Help Parish each day. Sadly, the city still suffers from deep poverty caused in part by overfishing, this year's El Nino effect and the resulting decline of its principal industry.  Seeking to avoid the smell that characterizes an aging fishing port, most of the wealthier residents have moved to nearby Nuevo Chimbote (New Chimbote).  Those left behind try to eke out a life in the dusty streets and ramshackle buildings that comprise the older parts of the city.  The children here are particularly vulnerable to hunger, disease, violence, chemical dependency and gang activity.