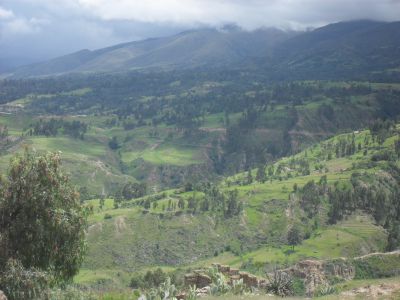 It is still before dawn.  But in the growing half light, I can begin to make out shapes undreamed.  On either side of the road that’s been running downward since before I was awake and before I was asleep there now appear, with increasing reality, svelte mellow mound shapes.  When the bus rests at a cross light, an untended mini-shack offers café and none of the platos tipicos.

It’s sooner than I thought for this realization.  But it’s also later in the morning than I expected.  And the unseen sun’s refracted glow has found a level of clarity to allow me to believe myself when I imagine the light-hearted, earth-grey dust is reminiscent of Lima.

It certainly isn’t from Quinua.  My eyes search for the accustomed succession of landforms.  The caked motor oil dirt of mechanic’s Ayacucho.  The jolted lush riverbed towns hidden under high stone hunks.  The badland scrub grass frontier that moves into the thick un-navigable cacti fields.  The lush upper pampas of Quinua that appear as soon as you cannot sit cramped in a taxi any longer.

Here in the place between where I’ve been and where I’m going, land continues to appear all around me and has learned to color itself, although only in black, gray, brown, and sand colored…sand.  I remember all my assurances that I loved Quinua and wanted to return immediately, but I had to finish my education and couldn’t promise when.

But will I ever return?  A missed chance at 1/7th of the world’s wonders ups the likelihood.  But if such an unexpected and unfamiliar city, with its grainy decaying churches and vibrant Catholicism could remain a hidden Shangri-La to a once avid reader of National Geographic like myself, what other gemmed cities remain in other corners of the world for me to stumble across?

Maybe the bulk and gravity of Quinua’s high-seated mountains will draw me in again.  Perhaps the allure of those peaks and the sweet air of 13,000 feet is reason enough to return.  I don’t know.

All I know now is the ashamed excitement of leaving family and setting out for friends.