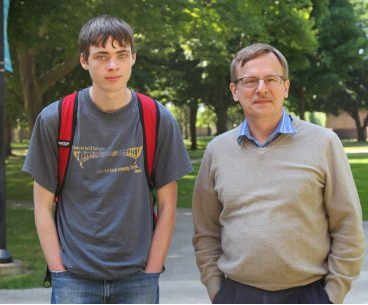 Mathematics major Nick Schrock worked with David Housman on a Maple Scholars project examining voting power when the voters’ ideological positions can be inferred from past votes. The Shapley-Shubik and Banzhaf power indices have been used to measure the voting power of voters in a variety of political institutions, including the United Nations Security Council, the United States electoral college, and proportionate representation legislatures in a variety of countries. These power indices depend only upon the voting rules; hence, each assigns an equal power to each of the nine Justices on the United States Supreme Court, because each Justice has one vote and cases are determined by simple majority. Once actual people having particular ideological positions and behavioral patterns become members of a political institution, their true voting power can be measured more accurately by taking into account their past behavior and political alignment with respect to other voters; for example, the Justice seen as occupying the central position in the liberal to conservative ordering of U.S. Supreme Court Justices is often considered more powerful than the other Justices. Nick examined power indices that take into account both the voting rules and the voting records of voters and applies these indices to the United States Senate.

Maple Scholars is an eight-week summer program that gives students the opportunity to participate in independent research projects alongside Goshen College faculty of various disciplines. Scholars keep each other informed of their progress in weekly seminars, and the program ends with a celebration involving a public poster session, presentations, and a dinner. Nick also presented his results at MathFest in Denver in August 2018, and during the Goshen College Academic Symposium in March 2019. Nick’s final report from the summer can be accessed from David Housman’s Undergraduate Research Page.   The picture shows NIck and David on a sunny day early in the summer program.