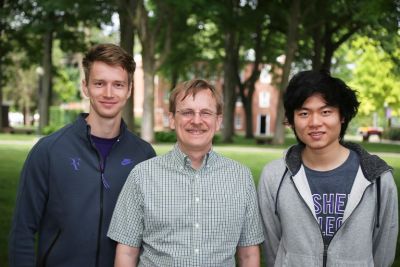 Mathematics and Physics double majors Matt Chen and Jon Kaasa worked with David Housman on Maple Scholars projects examining fairness.   Matt explored when a method for allocating benefits from a collaboration satisfies a desirable fairness property.  Jon explored the fairness of Norway’s system of proportional representation in its legislature.

Maple Scholars is an eight-week summer program that gives students the opportunity to participate in independent research projects alongside Goshen College faculty of various disciplines.   Scholars keep each other informed of their progress in weekly seminars, and the program ends with a celebration involving a public poster session, presentations, and a dinner.  Matt and Jon also presented their work at the 2016 Indiana Undergraduate Mathematics Research Conference held at IUPUI and the 2016 MathFest.

Final reports can be accessed from David Housman’s Undergraduate Research Page.  Here are short descriptions of their work.  The pictures are from the talks they gave at the 2016 Indiana Undergraduate Mathematics Research Conference. 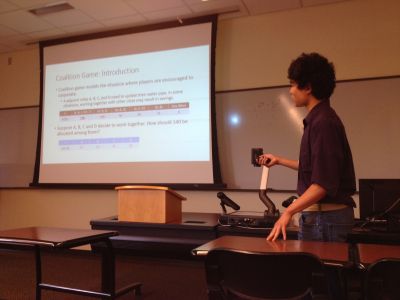 Matt explored when a method for allocating benefits from a collaboration satisfies a desirable fairness property.  A coalition game (N, v) models a situation in which gains can be made by collaboration: N = {1, 2, . . . , n} is the set of players and v(S) is the real-number gain achievable for each nonempty subset S of players (called coalitions).  The question is how to fairly allocate the gains obtained through collaboration, that is, what payoffs x1, x2, . . . , xn should be given to the players subject to the constraint x1 + x2 + … + xn = v(N)? The nucleolus is an allocation method that is group rational: the sum of the payoffs given to the players in S is at least v(S) for all coalitions S whenever such an allocation exists.  Unfortunately, the nucleolus is not always group monotone: an increase in one of the coalition gains v(S) may result in a decrease in the nucleolus allocation for some player in S.  Matt started to characterize the 4-player coalition games at which the nucleolus is group monotone. 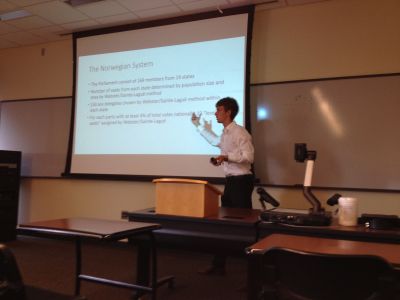 Jon explored the fairness of Norway’s system of proportional representation in its legislature.  The idea of Democracy is interchangeable with equal or “fair” representation. What does equal representation look like in a political system with multiple parties, millions of votes and only a limited integer number of seats to be allocated? Jon investigated the current apportionment method used in Norway: a proportional representation system where the unit of representation is bound both to territory and to party. The voting power of a political party is not necessarily proportional to the number of seats it controls, and so Jon also used of power indices defined by Shapley-Shubik and Banzhaf. In the given context of Norway, Jon investigated how close the voting powers of the political parties corresponded with the number of votes they received, and when it is advantageous for parties to merge together to increase combined voting power rather than stay separated.