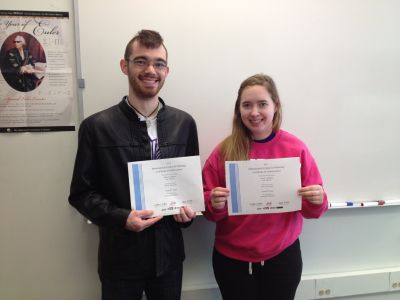 Garrett Ahlgrim and Zoe Blosser earned an Honorable Mention in the 2015 Mathematical Competition in Modeling, placing them among the top 42% of 7,636 teams of up to three undergraduate students from around the world.  Congratulations!

Teams chose one of two open-ended problems to solve February 5-9.  Garrett and Zoe worked on the “Eradicating Ebola” problem: The world medical association has announced that their new medication could stop Ebola and cure patients whose disease is not advanced. Build a realistic, sensible, and useful model that considers not only the spread of the disease, the quantity of the medicine needed, possible feasible delivery systems, locations of delivery, speed of manufacturing of the vaccine or drug, but also any other critical factors your team considers necessary as part of the model to optimize the eradication of Ebola, or at least its current strain. In addition to your modeling approach for the contest, prepare a 1-2 page non-technical letter for the world medical association to use in their announcement.