Students in the Wellness for Life class build cairns on the first day to reflect on what they can teach us about life and balance.

A cairn is an impermanent human-made pile of stones. The word “cairn” comes from a Gaelic term meaning “heap of stones.” A search on the Internet reveals that cairns have also been referred to as “trail ducks”; in Hawaii they are called “ahu” and by Native Americans, “Wa-wa-na-quas-sick” (place of many good stones). Rock piles have been constructed by a wide variety of people in different ways for many purposes throughout history.  Internet sources identified some popular locations known for cairn construction are Scotland, Canada, North American Artic, Acadia National Park in Maine, Colorado, Hawaii, Seattle Washington, Rhode Island, New York, Connecticut, Vermont, Virginia, Mississippi, New England, Mexico, South Africa, South Korea, Japan, Italy, Nepal, Tibet, French Alps, Iceland, Norway, Mongolia and Ireland.

One common purpose of a cairn is to guide hikers by marking the trail or a turn in the trail or a mountain top. There are multiple reports of people in the U.S traveling across areas marked by cairns. Inuit and Yupik natives in northern regions used rock piles in a similar way; to communicate that the hiker is on the right path or to show that someone had been there. These piles were called Inuksuk, which is close to, but not entirely the same as a cairn. Native Americans and others used stacks of rocks to mark water, food sources, land boundaries or another significant places like where a battle occurred or to mark a hunting location. Stone mounds were sometimes erected as monuments to mark a burial site or as memorials.

Cairns date back to ancient times as mentioned in the Bible. Rocks and piles of rock are mentioned in the Bible as well. Genesis 31:45-52 describes how a rock pile was used as a boundary. “And Jacob took a stone, and set it up for a pillar. And Jacob said unto his brethren, Gather stones; and they took stones, and made a heap….And Laban said to Jacob, Behold this heap, and behold this pillar, which I have cast betwixt me and thee; This heap be witness, and this pillar be witness, that I will not pass over this heap to thee, and that thou shall not pass over this heap and this pillar unto me, for harm.”

Historically, cairns were built by one person or by many people who contributed by adding a rock as they passed by the site. Other times, perhaps more recently rocks have been carefully balanced one on another. Michael Grab (Strege, 2014) from Boulder, Colorado started stacking rocks (“balances”) in 2008 and it quickly became a way to express himself creatively, reduce stress and relax. He is passionate about this hobby. (Strege, 2014. “Rock piles become man’s meditative art” http://www.grindtv.com/outdoor/outposts/post/rock-piles-become-mans-meditative-art/)

Buddhist writers describe the construction of a cairn as a form of worship, a way to ask for good fortune or an effort to balance energies. Cairns were used in astronomy or for pointing toward the setting sun for solstice celebrations. Other ceremonial uses are evident as well. Williams (2012) in his book tells a story about the Zuni Native Americans who are known for being able to run long distances without stopping. While running “they would want to rid themselves of the fatigue they had, they would pick up a rock, spit on it, rub it on their body and put it in a pile.” pg. 57)

In an article by Cynthia Drummond, writer for the Sun Staff newspaper the cairn as a place and object of prayer and peace is described. The news article reports about a dispute over removing cairns to build a subdivision. She includes the following quote by Doug Harris who spoke on behalf of the Narragansett Native Americans from Rhode Island. “Stone is a vehicle for receiving and transmitting prayer. So every one of those stones, as we do in our tradition, was placed by someone, some man, some woman, in prayer. A prayer was spoken into it and placed on the earth and that was to be received by our Mother the Earth and we as her children were to be balanced and harmonized by virtue of that relationship,” (Drummond, C. April 14, 2014, “Field of rock cairns complicates plan for proposed Hopkinton subdivision” in The Sun newspaper). In Ireland, reportedly a stone symbolized a weapon and the “Peace Cairn” was constructed when the people brought a stone to lay down to stop war. “This Peace Cairn has since 1993 symbolized the ‘laying down of primitive weapons – turning them into building blocks of a better future.’ Amen.” (http://www.rock-on-rock-on.com/cairns.html)

There is simple beauty in a cairn and connection with people from the past and from all over the world. After learning about cairns and practicing construction, Goshen students reflect about balance, simplicity, spirituality, peace, prayer, patience, direction, priority, and play. 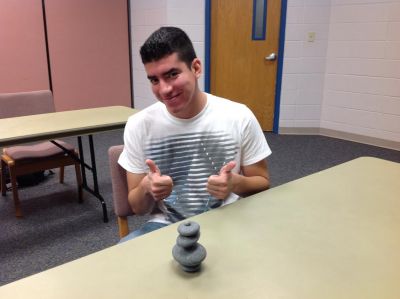 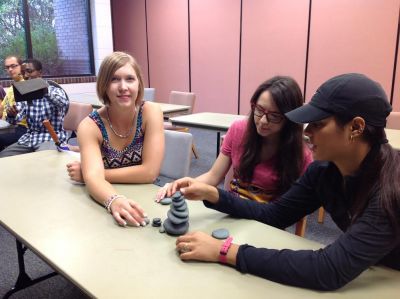