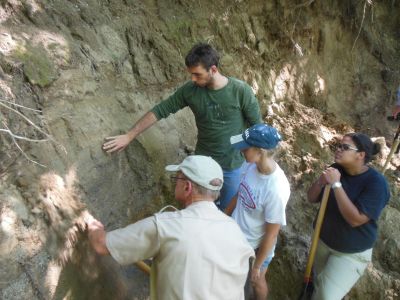 Weeks 3 and 4 of ASI have really flown by. The three of us have really grown closer to each other and have likewise gotten to know Dale and Jon quite well. Each morning we start out with a good 2 hour session of garden work which can be tiring monotonous work, but each day seems to reward us with something new none-the-less. We were all amazed when we saw just how much the tomato plants grew after we trimmed and staked them the previous day. Even weeding, what most gardeners find as a torturous job, was fun for me as I freed and liberated each small onion plant from its competition. Often as we weed, Jon will quiz us on each different weed we pull out. Krystel seems to be quite adept at finding the nettles with a cry of alarm each time her hand accidently encounters one.

On June 19th, Larry Yoder took us on a field trip to visit the Yoder Farm, giving us a tour of the landscape on the drive over. We found ourselves driving up and down three different moraines shaped by the great glaciers that once covered this vast expanse of the Midwest. Once we arrived at the farm, Larry gave us a tour of the maple syrup production and bottling set-up. And of course we could not leave empty-handed! He later showed us his huge asparagus forest and we aided in the squashing of many asparagus bugs. One of the other stops on his farmland was at his gravel pit where we were able to look at some of the different layers of sediment that the water left in the great sluiceway (speaking of which, our dear farm cat, Sluiceway, has gone missing, but we hope he is bringing joy to a new family).

Back on the farmstead, we recently were able to harvest from one of the two cherry trees already and boy was that exciting. We were able to bag and freeze 17 pounds of cherries but that doesn’t count the cherries that were eaten directly off the tree; all of us were guilty of that. The mulberries are also in full swing now, coating the ground under the trees. This gives the geese as well as us students a snack between class and garden work. 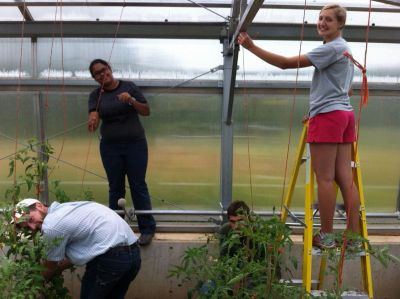 One of the most interesting accomplishments in the garden has to be the hanging of the tomato plants in the greenhouse. Taking most of the morning work session, we tied twine from rafters and wires to hold our ever expanding tomato plants. The finished product almost looked like a crazy science experiment with plants climbing higher and higher. Hopefully now with the trimming done, the plants can focus a bit more energy on fruit production. Then we’ll have some fresh tomatoes to eat with our hamburgers and in our salads!

Looking ahead, we are approaching the half-way point in the ASI and our soil and vegetable crop sessions will be replaced by farm management and agroecology classes. With a trip to Michigan State rounding out the first half, we have lots to look forward to. Excitement and dread rises as the midway point nears and our final exams and papers are due. But above it all, we can all truthfully say that we’ve learned so much more than we could have ever imagined from these first 4 weeks of ASI.