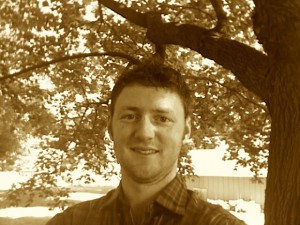 After finishing my junior year of high school and successfully completing 3 years of high school Spanish courses, I placed my language textbooks on my bedroom shelf where I expected them to stay and simply collect dust.  In a sense, I was right.  For the next 3 years as I finished high school and began my studies at Goshen College, my textbooks and the few language skills I had acquired would remain untouched, archived in the back of my mind only to slowly be forgotten with the passing of time.

This all changed however, when I unexpectedly found myself amongst a largely Hispanic workforce on the first day of my summer factory job following my freshman year at Goshen College.  As I entered the break room to gobble down my lunch during the allotted 30 minute timeslot, I was faced with a decision.  Do I sit at a table by myself or do I take my chances with my less than adequate Spanish skills and attempt to make friends with my new Hispanic coworkers?  Being that I’m not one to enjoy eating alone when there is interaction to be had; my decision was made quickly as I sat down after stumbling through a broken Spanish phrase and making some hand gestures to indicate that I wanted to join my coworkers.

This decision would prove to be a telling sign of things of come, as it was followed by a summer filled with new acquaintances, cultural fusion, a brushing up of my language skills in a real life environment, and a new spark for the love of the Spanish language and the people who speak it.

Returning to Goshen College that fall, I enrolled in a lower level Spanish course and the following semester I embarked on my Study Service Term experience in the Dominican Republic.  Needless to say, the spark that was ignited the previous summer in my factory job was turned into a full blown flame by the time I returned from my 3 month stay in the Dominican Republic.  My experience on SST gave me a taste of the Hispanic culture and people and provided me with the opportunity to be surrounded by the Spanish language.  Upon returning from the D.R., it became clear to me that I no longer wanted to let my Spanish books simply collect dust, I wanted to fully engage in the language and gain a complete understanding of it.  The result of these feelings, along with the guidance of Professor Dean Rhodes and Rafael Falcon, was a decision to study Spanish a major in college.

Thanks to the Goshen College Spanish Department, which requires two semesters of experience outside the U.S., before long I found myself in Mexico as a foreign exchange student studying at La Universidad Veracruzana. This experienced proved to be extremely fulfilling and aided greatly in my continued language study as well as expanding my worldview and my understanding of the Hispanic culture.

Looking back on my college experience at Goshen, my decision to study Spanish was crucial and a decision that has already opened many doors for me as a recent college graduate.  I currently work in a bilingual environment for a Mexican company which sends remittance money to Latin America and in the near future I have made plans to go to Ecuador to engage in Mennonite voluntary service.  The diversity of my experiences with the Spanish language at Goshen College has been invaluable and the way in which students are challenged to practically engage the language and culture are essential tools in today’s multicultural world.