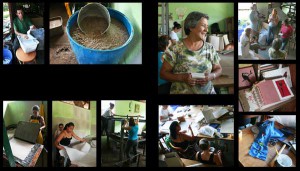 Professor of English Beth Martin Birkey traveled to Costa Rica in 2012 to complete a project she began in 2006 as part of a summer course she led called “Women and Development in Costa Rica.” As part of that class, they interviewed many women’s organizations and business in the Monteverde region. She and four students returned in 2007 to gather over 20 hours of video footage and hundreds of photographs.