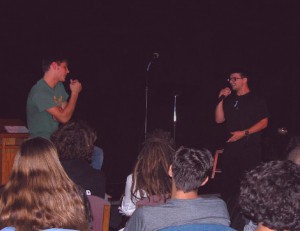 As the bass pulsed in the dim room—that traditional sound of the underground subculture—groups of students filed into NC 19 and took seats, chattering about the impressive array of pre-show snacks and the anticipation of being “slammed.” Soon the MC’s took the stage and the 2011 poetry slam was off, sprinting away to what proved to be one of the most satisfying GC slams to date.

Friday, October 28, 2011, marked the third year of the GC poetry slam, which is a collaborative effort between the CAC and the English Department. Both groups enjoy working together. Cora Broadus, the liaison between the two, commented that “working with CAC was wonderful; they did all of the decorations for the event and handled setting up the food. And it was a lot of fun working with Dolly and Joel [CAC members] for MCing.”

The event was open to the public and invited students of varied ages and interest in English to participate. Contestants—some of whom were not judged and simply read for pleasure—brought an original or previously published poem to the first round and read before the audience and the judges alike. After a brief consultation, the judges (Issac Hernandez, Abi Tsigie, Kate Friesen, and Sam Jones) then called back individuals for a second round of readings, culminating in the announcement of the winners.

This year’s winners were: Mary Roth (“Miles to Breathe,” “rain tonight”); Ted Maust (“Glow in the Dark,” “Not Untouched”); and Nate Vader (“Bad Poetry,” “Moving Out”). A large number and variety of students showed up for the event, noted English Department Professor Jessica Baldanzi, estimating a turnout of about 80. She added, “It was great to see such a broad range of the student population participating. A lot of people just wanted to read poetry without entering the competition, and they were a fabulous contribution as well.”

All in all, the event was an undeniable success, for both students and departments alike. Said Baldanzi, with enthusiasm: “The audience and number of competitors have grown every year. We’re excited that the event just keeps getting better and better, and we’re looking forward to next year!”