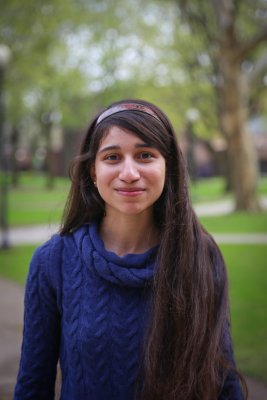 Ebtihal Abdelaziz, a senior mathematics and physics double major from Cairo, Egypt, gazed at the sky with wonder as a child. Now, she’s helping the world better understand the universe through a summer internship at Fermilab, a particle physics and accelerator laboratory in Chicago.

When Abdelaziz was choosing colleges, proximity to this laboratory was actually one of her consideration factors, along with looking for colleges that support international students.

“I just always looked at the sky and was inspired by all the stars in it,” Abdelaziz said of the night sky view in Cairo, which helped inspire her interests.

Abdelaziz’s parents took her to the public library, encouraged her to ask teachers questions and drove her 30 minutes to events held by the Giza Astronomical Society.

Abdelaziz’s dream internship was with Fermilab, the 6,800-acre particle physics and accelerator laboratory in Batavia, Illinois. Fermilab is managed by the Fermi Research Alliance LLC for the U.S. Department of Energy Office of Science, and a “consortium” of 89 colleges and universities led by the University of Chicago, Universities Research Association Inc.

Abdelaziz’s physics professor, John Ross Buschert, introduced Abdelaziz to the “Conference for Undergraduate Women in Physics.” In her sophomore year, the University of Chicago hosted the conference, with options to tour two labs: Fermilab and Argonne.

While Abdelaziz applied last year for the competitive internship and didn’t get in, this year she did. After applying and being interviewed, two weeks later, Abdelaziz received her acceptance letter. For two days after that, she said she reread the email to make sure that it was true.

At Fermilab, Abdelaziz is working with the South Pole Telescope, a cooperative project between Fermilab, the University of Chicago and several other universities worldwide. They are measuring and analyzing the cosmic microwave background (CMB).

CMB is the oldest light in the universe, according to Abdelaziz, which has gone through the galaxy in waves 380,000 years after the Big Bang.

“I am in particular working on finding cosmic strings in the CMB data collected from an experiment at the South Pole Telescope called SPT-3G,” explained Abdelaziz. “Cosmic strings have not been detected before yet all standard models of physics predict their existence. So this summer I am hoping I can find them!”

While Abdelaziz is just in the beginning of the internship and this type of work would typically be for graduate level students, she notes that there’s “a lot I’m still learning.”

“I want to be a cosmologist, so this is what I want to learn and understand,” she said.

Abdelaziz has met about 40 scientists from Chicago and Fermilab and is making connections along the way. The connections she’s made will help her determine what to do in graduate school. Cosmology is a huge field, Abdelaziz said, and there are “so many different questions you can solve.”

Abdelaziz is working with experimental cosmologists to learn the tools they use in their research. Abdelaziz said she is currently planning to pursue theory for graduate school, but “I may be converted to the ‘dark,’ experimental side by the end of my internship.”

She’s also spoken to graduate students and gained a better understanding of what graduate school is like.

“It’s really interesting to learn what they are going through, what it’s like to be a grad student,” Abdelaziz said. “It’s a very educational experience.”