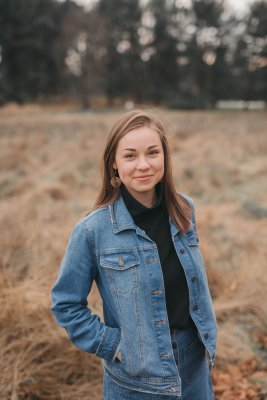 Mackenzie Miller, who graduates from Goshen College this spring with majors in journalism and English, received the Indianapolis Press Club Foundation scholarship for deadline news coverage.

The awards are officially named the Last Row Party Scholarships, in recognition of the Indianapolis Motor Speedway, which sponsors the scholarships.

Each spring, students can submit two samples of their best work in any one of the categories. The Indianapolis Press Club Foundation received 32 entries this year.

Miller, who is from Lancaster, Pennsylvania, served as executive editor of The Record, the weekly student newspaper, in the fall of 2020. The Indiana Collegiate Press Association last month named The Record “Newspaper of the Year” in the college division.

“Followers of Mackenzie’s work in The Record recognized early on that she is an exceptional journalist,” said Duane Stoltzfus, the faculty adviser to The Record and chair of the communication department. “As she finishes her last college class in May, this statewide award arrives as a lovely grace note.”