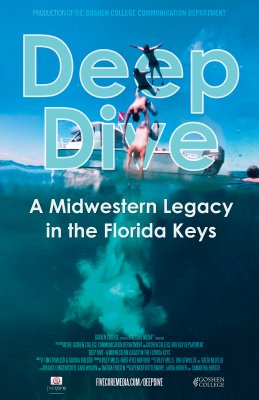 A year’s worth of work for a team of more than fifteen Goshen College students culminated in the premiere of their documentary, “Deep Dive: A Midwestern Legacy in the Florida Keys,” on Tuesday, March 27, at 7 p.m. in the Goshen College Umble Center.

The film chronicles the 50-plus year history of Goshen College’s Marine Biology program and the relationships built with the Layton, Florida community where the facility is housed.

“Deep Dive” premiered in front of more than 215 students, staff and community members.

The film recently won two Indiana Association of School Broadcasters (IASB) awards, as well as second place for best short film (fictional narrative or documentary) and another second place for best cinematography. The IASB are the top state awards for colleges with media and broadcasting programs.

At the end of the night, Ryan Sensenig, professor of biology, talked about the future of the marine biology program, which will include a new major in the program and a new marine biology semester at the Goshen College facility in partnership with Old Dominion University.

The film will also be submitted to film festivals around the country and to various professional and academic competitions.

Last May, six film students joined 12 biology students for a three-week course taught at GC’s J. N. Roth Marine Biology Station in Layton, Florida on Long Key. In it’s 51st year of operation, this course combined elements of communication and biology for an immersion in not only the community of Layton, but the differing disciplines as well.

The film students literally got in the water with the biology students to participate in and film some of their activities and projects.

“One part that was really striking for me was how much I learned about marine biology,” said Riley Mills, a senior communication major. “I wasn’t participating in their research, but filming them and talking with the students gave us a lot to learn.”

Saylor agreed, saying, “It was exciting for me and the biology students to share our love of science and to introduce new ecology concepts and new organisms to the film students, but it was also interesting to see the course from the film students’ perspective. It made me think about the course in new ways. The film students had to put up with all of our nerdy biology discussions but they were engaged and interested the whole time. They got to learn about marine biology and we learned so much about the storytelling process and what it takes to make a film.”

The film students worked to create a documentary focused on highlighting the legacy of the marine biology program and its relationship with the surrounding community.

“A project like this is why I came to Goshen College,” said Hufford. “The ability to offer these types of enriching hands-on-learning opportunities to students is invaluable. Students learn what it’s like to be a part of a real film set in an intensive and immersive semester off campus like this.”

At times, the film crew went door-to-door in to see if community members were interested in being interviewed.

“The students had to figure out who to talk to and do a lot of research on the ground to arrange things,” Hufford said. He added that the town of Layton played a big part in the development of the story. “The community itself is really a character in the documentary, and the majority of interviews were community members,” he said. Being outside of Goshen offered film students the chance to engage with storytelling in a different way.

They filled the roles of a traditional film crew, including producer and director, and worked to develop skills in working as a team to produce a large-scale product. The course also gave film students the opportunity to work with different equipment and develop a different set of skills.

With the use of a drone to capture aerial footage and small, underwater cameras to capture shots of biology students working beneath the surface, film students gained a wider understanding of the tools needed for different settings.

“While we were learning what it was like to build a documentary,” said Mills, “we also learned about biology and the effects that the center has had on the community.”

Sophomore biology student Jose Chiquito Galvan spoke to the connection between the disciplines that took place in Layton.

“The film students were amazing to work with,” he said. “They provided us as Goshen College a much needed way to reconnect with the community of Layton. Through their film interviews and work, we were able to better understand the community we lived and studied in.”

To learn more go to goshen.edu/deepdive

About the Goshen College Communication Department: The Goshen College Communication Department has been recognized in the state and nation for its excellence in broadcasting, journalism, speech, film production and writing. The department’s has been named Indiana TV and Radio school of the year multiple times, Best College Radio station in the nation twice, Indiana Broadcasters Association Best Radio Station, Best College Newspaper in the state and many more. Students from Goshen College’s Communication Program get hands on learning opportunities with the department’s co-curriculars like, The Record, PRSSA, WGCS 91.1 The Globe, FiveCore Media and GCTV. To learn more visit www.goshen.edu/communication