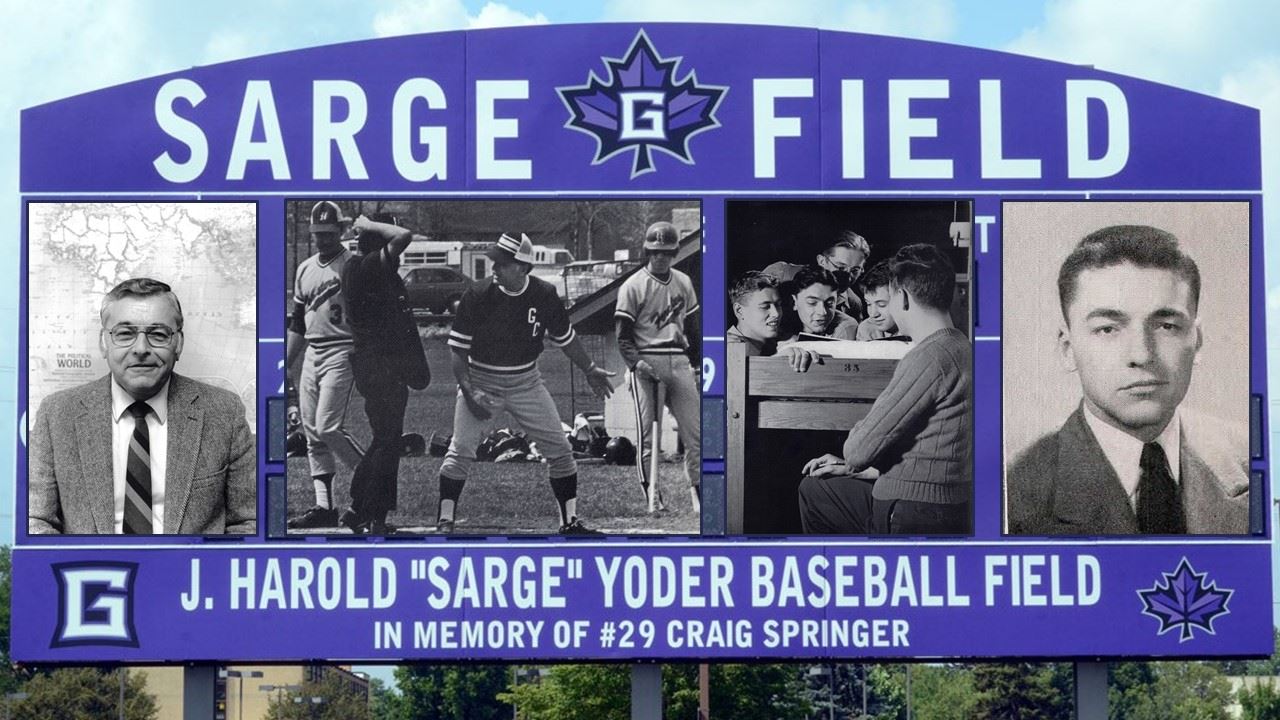 Dr. Yoder coached four different teams during his time at Goshen. He was the men’s head basketball coach for four seasons, from 1958-1961 and then again for the 1964-65 season. He also served as the men’s head soccer coach in 1961 and 1962. His men’s tennis teams sported a record of 82 wins and 45 losses when he guided the team from 1976 to 1986 and in 1990. In 1983, Dr. Yoder was voted Tennis Coach of the Year by the coaches of 11 District 21 teams participating in the 1983 National Association of Intercollegiate Athletics (NAIA) tennis tournament. His team took first place in the Mid-Central College Conference tournament held that year. He was even the Athletic Director for a period of time.

On Saturday, October 3, 2015, Dr. Yoder was in attendance as Goshen’s baseball field was named in his honor. The Dr. J. Harold “Sarge” Yoder Baseball Field will forever remind student-athletes, coaches and fans of the man who was instrumental in establishing or building numerous teams at Goshen College in the early days of Maple Leafs athletics.

“It was a great experience,” Yoder told The Goshen News about the dedication at the time. “It humiliates me almost because I was just another jock here. It’s a great pleasure and an honor.”

Dr. Yoder was an instructor of physical education at Hesston College in the 1950-1951 school year and provided relief with the Mennonite Central Committee in Japan from April 1952 to August 1953 and in Korea from August 1953 to March 1955. He would later return to work in Japan in 1972 as a part of Goshen College’s Study-Service Term (SST) and then again in 1979. He completed his master’s at The Ohio State University in 1957 and his doctorate at Purdue University in 1968.

After his time at Goshen College, Dr. Yoder coached the Bethany Christian High School boy’s tennis team and was the director of tennis tournaments for the Goshen Parks and Recreation Department.

Along with his parents and wife, Dr. Yoder was preceded in death by his siblings, Rueben Clifford Yoder and Florence Lucille Detrow, and a grandson, Neil Yoder. Survivors include three children, Beth Yoder Jensen, Barbara Yoder and Steve Yoder, all of Kansas, and seven grandchildren.

Dr. Yoder was a long-time member of College Mennonite Church in Goshen.