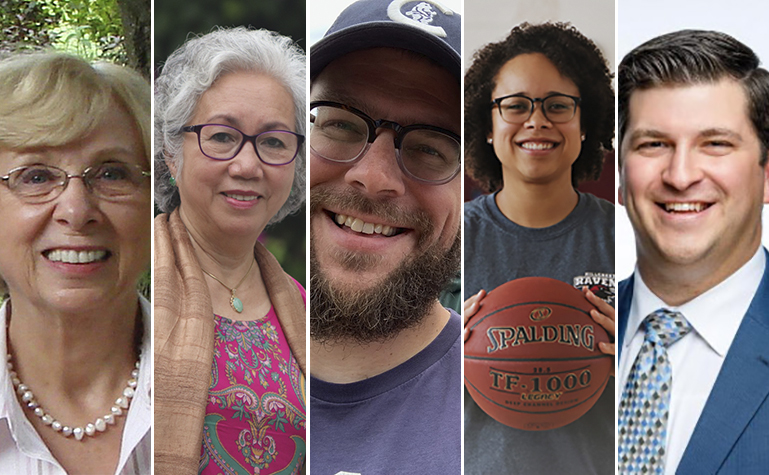 During Goshen College’s Homecoming Weekend on Oct. 4-6, the college honored five outstanding alumni with awards for their commitment to the college’s core values.

Sponsored by the Goshen College Alumni Board, the 2019 Alumni Awards were presented to:

For the 14th year, the Goshen College Maple Leafs Athletic Club presented the Dr. Ruth Gunden and the Dr. Roman Gingerich Champion of Character Awards. The two awards, created in 2005, are presented to a male and female alumni athlete who exemplify the college’s core values in their lives, work and community service. Gunden and Gingerich were pioneers in Goshen College’s athletic history.

Minh Kauffman ’74 improves lives around the world through global connections

Minh (Nguyen) Kauffman ’74 has dedicated her professional life to social change and community building across countries, cultures and language barriers, through organizations like Mennonite Central Committee (MCC) and the Center for Educational Exchange with Vietnam (CEEVN), an affiliate of the American Council of Learned Societies.

Kauffman grew up in Saigon, Vietnam, and came to Goshen College in 1969 where she met students from across the globe, as well as her future husband, Fred Kauffman ’73.

Through short-term consulting in Vietnam, Kauffman discovered ways to support the Vietnamese when they were still feeling the effects of the Vietnam War.

In 1989, Kauffman created the Education Exchange Center, a project of MCC’s Vietnam program. The organization set about to aid Vietnamese agricultural universities in connecting with Southeast Asian countries to participate in professional exchanges. They also facilitated the work of American NGOs and academic institutions, introducing the idea of exchange programs with Vietnam.

Renamed the Center for Educational Exchange with Vietnam (CEEVN) in 1994, the organization has given hundreds of mid-career Vietnamese the path to international education and opportunity, with Kauffman at the helm. It has produced leaders in many fields, including top ministry levels of government. She also advised the Ford Foundation in its programs in the country.

Kauffman plans to retire in 2020, but the legacy of CEEVN will continue in the hands of a local Vietnamese NGO made up of alumni of the exchange program.

Among 10 national awards that Minh received in Vietnam is the Presidential Medal of Friendship in 2005, the country’s highest medal awarded to foreigners.

Kauffman lives in Philadelphia, Pennsylvania, with her husband Fred, and have two adult children, Tony and Timothy. She is actively involved in Philadelphia’s Vietnamese Mennonite Church.

Through generosity and leadership, Carolyn Sauder ’55 weaves together belief and action

Carolyn (Yoder) Sauder personifies generosity and service, giving freely of her time, resources and talents to improve the world and everyone around her.

Formerly the executive director at Sauder Village in Archbold, Ohio, she continues in her 45th year there as a volunteer.

Sauder grew up in West Liberty, Ohio, and graduated from Goshen College with a degree in education.

Sauder met her husband, Maynard, at Little Eden Mennonite Camp. As a newly married couple, they were charter members of Zion Mennonite Church in Archbold, Ohio, and each had a role to play in the family businesses.

Helping to implement Erie’s vision in 1976 to keep the ancestral history of Ohio alive, she helped grow Sauder Village by developing relationships with staff, educators and museum and history professionals. Sauder Village opened for its first summer with 42 employees, and has grown to more than 400 employees and 400 volunteers.

She retired in 2000, and her daughter, Debbie Sauder David, followed in her footsteps, taking over as executive director.

In addition to her leadership at the village, Sauder’s passion for music and the arts led her to help get the ball rolling and serve on the Goshen College Music Center fund drive and planning committee. It is now the home of the Sauder Concert Hall.

Sauder also was on the senior advisory council for the campaign to build a new library at Anabaptist Mennonite Biblical Seminary (ABMS) in Elkhart. She established the Sauder Stewardship Foundation to perpetuate the spirit of generosity and make a meaningful, positive impact on the community, nation and world. She also supports Mennonite Central Committee, Mennonite Economic Development Associates (MEDA) and other organizations that promote peace and justice in the world.

Carolyn and Maynard still live in Archbold, Ohio, and have enjoyed traveling and learning about other cultures, and are active members at Zion Mennonite Church.

A graduate of Goshen College’s peace, justice and conflict studies program, Rob Vander Geissen-Reitsma ’05 has dedicated his life to aiding others and advocating for peace.

Since the early 2000’s, Vander Giessen-Reitsma and his wife Kirstin have been leading a community development movement based in Three Rivers, Michigan. Vander Giessen-Reitsma works as the executive director of *culture is not optional (*cino), a nonprofit organization that is rooted in Christ and whose mission it is to model and encourage creative communities.

Currently, *cino’s main focus is The Huss Project, an initiative that began in 2009 to transform an abandoned elementary school in a lower-income neighborhood into a lively community space. At the end of last year, Vander Giessen-Reitsma’s leadership was crucial in a successful financial campaign to win a $50,000 grant to create a renovated, indoor community space at the Huss School called the Imaginarium, which will allow for year-round programming.

“Over the years, I think we as people and as an organization have grown in understanding that the only way to live alongside and serve your neighbors is to do that in the place where you are,” Vander Giessen-Reitsma said.

The Huss Project promotes community development and has hosted such programs as art installations, festivals and service-learning groups. Over the summer, The Huss Project partners with local schools to provide lunches for children during the week. They also have an urban farm on site, and 80 percent of the produce is distributed to people in the area without access to fresh vegetables.

The Vander Giessen-Reitsmas also helped start and continue to help run World Fare, a volunteer-run fair trade store in downtown Three Rivers that they opened the same year he came to Goshen College.

“I’m pretty convinced that if we were to try this radical love ethic we might find flourishing for all people, particularly the oppressed, but also freedom for the oppressor in that as well,” said Vander Giessen-Reitsma. “That’s a pretty radical idea and hard to live out in everyday life but it underlies most of what we’re attempting to do.”

Kari Heusinkveld ’12 leads by example, on and off the court

Kari Heusinkveld ’12 has brought the knack for leadership and passion for basketball that she demonstrated at Goshen College to Hillcrest Academy (formerly Iowa Mennonite School) in Kalona, Iowa, where she has served as the head girl’s basketball coach since the 2015 season.

After transferring to Goshen from Hesston College, the point guard wasted no time making her mark on the Maple Leaf basketball program. Heusinkveld started 14 times and appeared in 28 games during her first season at GC in 2010-11, averaging 3.6 points and 2.2 rebounds per game. In her senior season, Heusinkveld served as team captain, the first under current head coach Stephanie Miller, and was also named team MVP. She started in 29 games, averaging 7.6 points and 4.3 rebounds each game.

In March 2019, Heusinkveld was a recipient of the E. Wayne Cooley “You Can” Award by the Iowa Girls Coaches Association for her work in rebuilding the girls basketball program at Hillcrest Academy. This award is meant to recognize coaches who are early in their coaching career and are building up a varsity program. Heusinkveld was one of just three coaches in Iowa given the award for girls basketball.

Heusinkveld’s coaching philosophy is one of encouragement. “My goal is to provide a positive athletic experience for each of my athletes and I believe that that first starts with creating a safe, controlled environment that is conducive to learning,” she said.

Garrett Cannizzo ’12 was a top athlete and a strong scholar during his four years at Goshen College, which has helped lead him to early success in his professional life, including being named to the South Bend Tribune’s 2018 “Michiana Forty Under 40” list.

The recipient of the 2017 Indiana CPA society’s Emerging Leader Award, Cannizzo currently works in Elkhart, Indiana, as an audit senior manager at RSM US LLP, which is the fifth largest public accounting firm in the country. In this role, he specializes in working directly with companies in the manufacturing industry, and his clients are spread across the country.

Originally from Arlington Heights, Illinois, Cannizzo came to Goshen College to continue his baseball career and pursue a degree in accounting, while also minoring in business and entrepreneurship.

Cannizzo was a vital member of the Maple Leaf baseball team during his time at Goshen. In his senior year, he maintained a career high 0.321 batting average, and was consistently one of the teams top hitters, serving as designated hitter his junior and senior seasons. He also was a top outfielder, posting an impressive 0.957 fielding average for his collegiate career.

Off the baseball diamond, he was involved on campus, serving in positions such as business manager of The Record and resident assistant.

Since graduating, Cannizzo has been deeply involved in his local community with a number of non-profit organizations, both in volunteer and board positions, which he notes has helped him create business connections and accelerate his career trajectory. He attributes this to his time at GC.