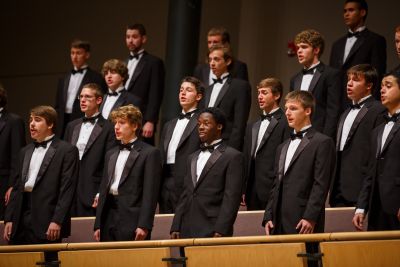 The Goshen College Men’s Chorus will conclude their spring break tour to New Orleans with a home concert in the Music Center’s Sauder Concert Hall on Sunday, March 1, 2015 at 7:30 p.m.

The theme for the choir tour is “Ride on, King Jesus,” which is taken from a set of three spirituals by beloved New Orleans composer and conductor Moses Hogan. In addition to singing traditional spirituals and hymns, they will perform pieces by George Frideric Handel, Jacob Handl, Mikhail Ippolitov-Ivanov and Ludovico da Viadana.

Tickets cost $7 for adults, $5 for seniors/students, and is free for GC students and faculty/staff with ID. A live stream of the concert can be seen at www.goshen.edu/academics/music/livestream.

The Goshen College Men’s Chorus, founded in 2004 and directed by Scott Hochstetler, associate professor of music, follows in the long tradition of GC male singing groups beginning with the men’s glee clubs and the Rambler Quartet of the early 1900s. Including music majors and non-music majors alike, the Men’s Chorus performs music from all genres and time periods with special emphasis on sacred a cappella literature.

Hochstetler is associate professor of music at Goshen College, where he teaches in the choral, vocal and opera theater programs. Under his direction, the Goshen College Men’s Chorus performed to acclaim at the ACDA regional convention in March 2012.