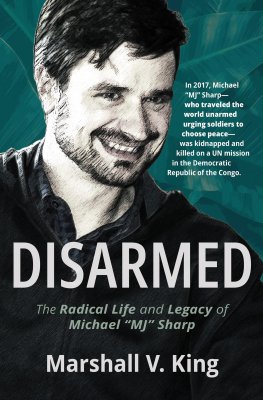 At 34 years old, Michael “MJ” Sharp was working for the United Nations Group of Experts in the Democratic Republic of the Congo – urging rebels to lay down their weapons – when he and his colleague, Zaida Catalán, were murdered, likely assassinated by killers with government ties.

Marshall V. King, a longtime journalist in Elkhart County and an adjunct professor of communication at Goshen College, tells about Sharp’s life, death and legacy in his new book, “Disarmed: The Radical Life and Legacy of Michael ‘MJ’ Sharp” (Herald Press, January 2022).

King will talk about Sharp and the writing of the book on Tuesday, Jan. 25, at 7 p.m. in the Umble Center at Goshen College. The presentation will allow time for questions from the audience. A book signing will follow, with copies of the book available for purchase.

In “Disarmed,” King explores what compelled Sharp to travel the world working for peace.

“The deaths of MJ and Zaida have remained an international murder mystery for nearly five years,” King said. “Yet it is their lives that can inspire us as we long for justice in the world. They worked for restoration and others’ well-being.”

After graduating from Eastern Mennonite University in Harrisonburg, Virginia, Sharp joined Mennonite Mission Network, based in Elkhart, and moved to Germany, where his service included encouraging soldiers to choose peace.

“MJ didn’t wear a cape or spin webs,” King writes. “He didn’t become a millionaire as some thought he would. He didn’t bring lasting peace to the DRC. Yet he used his amazing intellect, quick wit and passion to make the world better. He saved lives with his words and actions because he was willing to listen first.”

King, who lives in Goshen, worked for The Elkhart Truth for more than 20 years as a reporter and eventually managing editor. His writing, including the popular Dining a la King column, often focused on food. He is the head storyteller for the Community Foundation of Elkhart County.