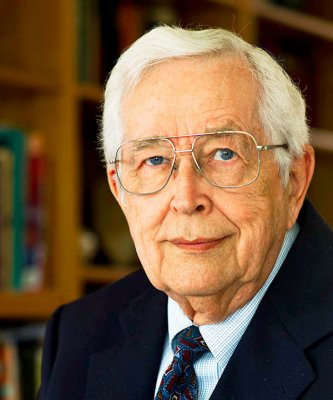 During his 22 years of service at Goshen College, Weaver took on a variety of different responsibilities. In addition to his primary role as professor of chemistry, from 1965 to 1967 he was the assistant to President Paul Mininger, and Weaver was the acting dean from 1970 to 1972. Serving as provost from 1972 to 1979, he was acting president for the winter of 1976-77. Weaver returned to a role at Goshen College in the fall of 1996 to serve as interim president.

Weaver played a significant role in developing the Study-Service Term (SST) program as a general education requirement at Goshen College in 1968, as he served as the first director of international education for the college. It was one of his proudest professional accomplishments.

“Hank was particularly gifted at reading people and crossing cultural barriers,” said Tom Meyers, professor emeritus of sociology, who served as associate academic dean and director of iInternational education. “With a twinkle in his eye he was also a great storyteller and was always ready to describe some moment in the history of the development of the international education program.”

He later graduated from George Washington University with a bachelor’s degree in chemistry in 1950, and went on to obtain his master’s of science degree in organic chemistry and a doctorate in physical chemistry from the University of Delaware in 1953. Weaver taught chemistry briefly at EMU before beginning as a chemistry professor at Goshen College in 1957.

Weaver found ways to travel by working as a Fulbright lecturer, among other university positions. Fluent in Spanish and having formally studied five other languages, Weaver has lived in Perú, Nepal, Poland, Spain and Bulgaria. Weaver learned from the relationships he developed with universities in these countries. “The close interaction with faculty helped me to see each country from people inside the structure and to see my own country through their eyes,” he said.

Weaver has served as a consultant or examiner at more than 20 institutions around the world; he has also published work covering chemistry, education and other topics in professional journals, books, magazines and textbooks.

In retirement, he continued his passions for photography and ham radio. He and Mary spent time in both Goshen and Apex, North Carolina.

Weaver was a longtime member of College Mennonite Church in Goshen. During his time in California, he was a member and elder of the Goleta Presbyterian Church. In North Carolina he attended the Kirk of Kildaire Presbytarian Church of Cary.

Weaver was preceded in death by his parents and siblings, and his beloved wife, Mary ’52. He is survived by his four children: Sally ’79 (John ’79) Weaver Glick of Goshen; Judy ’81 (Richard Aguirre) Weaver of Goshen; Debora Weaver ’83 of Fuquay-Varina, North Carolina; and J. Donald ’83 (Rosanna ’86) Weaver of Hyattsville, Maryland; nine grandchildren and one great-grandchild, as well as a large extended family.