Olivia Krall is a sophomore history major from Carmel, Indiana. This story was originally created for the StoryCorps oral presentation project in the college’s first-year course: Identity, Culture and Community. It has been edited for space and context. 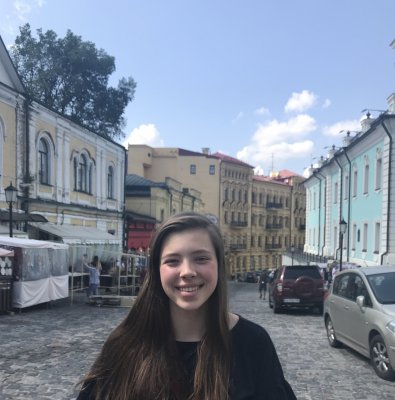 Six days before my 17th birthday, I found myself stepping off a plane onto the tarmac in Odesa, Ukraine, with my mom and grandparents. For some reason, unknown even to myself, I had chosen to join 190 other Mennonites on a heritage cruise up the Dnieper River. Initially, it seemed to be one ordeal after another and I was having some regrets: a terrifying first customs experience involving soldiers with machine guns, lost bags, insurmountable language barriers and one memorable experience of being yelled at in the Odesa opera house. But there were also bright spots in the early days of the trip: the beautiful bright blue Orthodox churches springing out of the town squares and kittens roaming streets lined with apricot trees. These began to fade as we moved inland past the Black Sea, and there were fewer and fewer towns.

Without the excitement of new experiences, the trip descended into monotony and loneliness for me. While my family flitted from conversation to conversation, I felt disconnected. Despite sharing the same heritage, I felt detached by my age and culture. This was exacerbated when we reached the part of the journey reserved for bus trips through formerly Mennonite settlements.

On the first day of the tours, our group of 30 traveled through a region known as Molochna. What was intended as an 8-hour bus trip quickly slid into hour 14. By then I was hungry, exhausted, irritable and tired of peeing in fields. All I wanted to do was head back to the boat. So when we pulled up to an abandoned train station, I could only be described as exasperated. The sun had set, and the only lights remaining were the headlights on the bus.

As I caught up to the group, I saw that they had gathered in the middle of the tracks. The leaders of the group informed us that this was the train station Mennonites had used to flee persecution, and that would later carry them to execution. They recounted that as each train of Mennonites left, those that remained sang the hymn “Take Thou My Hand, O Father.” When the last of the Mennonites boarded the train, and there was no one left to sing, the Ukrainians — who had never gotten along with the Mennonites — sang it to them.

Together as a group, we stood in the dim light of the headlights and sang that hymn together. I could not see the faces of those singing around me, and I barely knew the German lyrics, but nevertheless, that moment bound me to those people. I became tied to this group that had survived famine and oppression, and also tied to the community on the boat.

On the trip, a group of psychologists told us that trauma is passed on genetically. It is felt and dealt with through generations. I have come to believe that if this is true, then resilience can also be passed on through genetics. I hold the heritage and resilience of my ancestors in myself, and only 190 Mennonites on a boat could have shown me that.