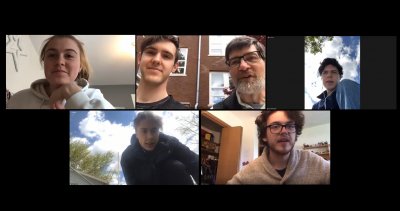 During a time when Goshen College students are strewn across the globe, the May term astronomy class had the unique opportunity to measure the circumference of it.

On May 12, the class recreated the measurements of Eratosthenes, who completed the first accurate measurement of the circumference of the Earth in 240 B.C.

The idea was the brainchild of John Ross Buschert, professor of physics.

“I’ve long known about Eratosthenes’ measurement,” said Buschert. “[I] often thought it would be an interesting experiment to have the class attempt.”

Buschert led the class via a Zoom video call. Paul Keim, professor of Bible and religion, gave historical background about the experiment.

Born in 276 B.C., Eratosthene was a Greek geographer, poet, and astronomer. Towards the end of his life, he served as the director of the Library in Alexandria, Egypt.

“In about the year 240 B.C., Eratosthenes determined the circumference of the earth by measuring the angle of the sun at different places,” said Buschert.

Eratosthenes knew that in the city of Syene, Egypt, the sun’s rays fall vertically, casting no shadow. So he measured the angle of the shadow in Alexandria and using the 500 mile distance between the two cities, he calculated the circumference of the earth.

“From that he found that the sun’s angle from vertical was about 1/50 of a circle,” said Buschert. “By simple geometry, the whole earth must be 50 times the distance between the cities.” 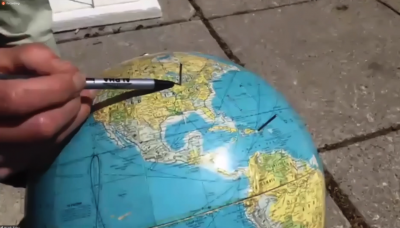 The sun never passes directly overhead in Goshen, so Buschert was never able to do this activity while his class was on campus. But with the pandemic causing all of the students to leave campus, this was the perfect time.

“In my astronomy class I have one student, Lisa Rosado Rivera, who is in San Juan, Puerto Rico,” said Buschert. “It turns out that on May 12 and 13, the sun passes directly overhead there.”

So when the sun reached its peak in Puerto Rico at 12:20 p.m., everyone took their measurements.

As the results came in, students were reporting many different measurements, but most were within 1 percent margin of error of the earth’s 40,075 kilometer circumference.

“This is great,” said Buschert. “This is succeeding beyond my wildest dreams!”

Techniques from a copper pipe in a parking lot to a screwdriver on a string helped students get their measurements. One student brought out his home’s light source to measure the sun’s.

“I was different,” said Eric Miller, a sophomore. “[I] brought my tall lamp outside.”

Although techniques differed from student to student, all gained new experience in learning through online class.

During this unfamiliar period, learning can be a challenge to both professors and students. But through a little creativity and a lot of sun, new ways can be found to continue education.