On August 21, 1894, the Elkhart Institute for Science, Industry and the Arts opened its doors at the Grand Army of the Republic Hall on South Main Street in Elkhart. A few years later the campus relocated to Goshen at the invitation of community leaders and its name changed to Goshen College.

This year, Goshen College celebrates its 125 anniversary － the quasquicentennial － of being Elkhart County’s first and only four-year, residential, private college.

The Elkhart Institute began with the initiative of homeopathic physician H.A. Mumaw as a private preparatory school to provide the opportunity for Mennonite and other young people to further their education. Soon afterwards, the Mennonite Church took over its operation.

A new Elkhart Institute building was erected in 1896, and the school grew rapidly. In 1902, with a flourishing enrollment of 328 students, the board began looking for other locations where the school could expand its facilities. 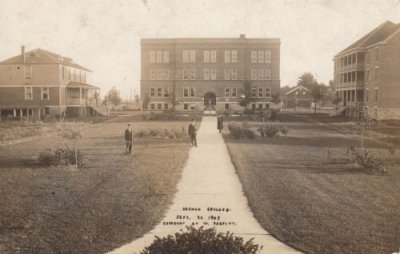 Although the Elkhart Institute board considered several sites in Elkhart and even other states, several Goshen businessmen convinced the board to relocate to Goshen and call it Goshen College. For the groundbreaking in 1903, two special interurban cars brought around 150 students, faculty and civic leaders to the new campus site: a wheat field on the Shoup farm on the south end of Eighth Street.

In his inaugural address at the turn of the century, Goshen College’s first president Noah Byers suggested “Culture for Service” as the college’s motto, and it has stuck ever since.

One of the college’s distinctive programs is its Study-Service Term (SST), which was started in 1968 as a cutting-edge international education program, built on the experiences of many faculty members who had lived, studied and served abroad. Since then, more than 8,000 students and 230 faculty members have journeyed to 25 countries through the semester-long, immersion experience of SST, which features the uncommon combination of cultural education and service-learning.

In recent decades Goshen College has sought to be a leader in sustainability and environmental education. A few initiatives include voluntary purchasing 100 percent of electricity from renewable energy sources, such as wind and solar power, converting 12 acres of lawn to native prairie and installing 924 solar panels.

Since its founding, Goshen College has played an important and enduring role in shaping the people and culture of Northern Indiana.

Though Goshen College educates students from all over the world, currently about 38 percent of students come from Elkhart County and another 20 percent come from other parts of Indiana.

More than 4,000 alumni and their families live and work in Elkhart County, serving as leaders, business owners, educators, health workers and more. Thousands of visitors come to Goshen annually for concerts, lectures, arts and sporting events hosted by Goshen College.

Today, more than 20,000 Goshen College alumni reside throughout the world in more than 85 countries, and the campus has expanded to 135 acres with 19 major buildings and two satellite campuses － Merry Lea Environmental Learning Center in Wolf Lake, Indiana, and a marine biology station in the Florida Keys. The college now offers 43 majors and 51 minors of academic study, as well as select graduate programs, with quality professional programs and facilities. Learn more about Goshen College.

As it prepares for the next 125 years, the Goshen College Board of Directors approved new mission and vision statements for the college in 2019:

Vision Statement: “Goshen College will cultivate joy, growth and purpose, preparing students to thrive in life, leadership and service. Rooted in the way of Jesus, we will seek inclusive community and transformative justice in all that we do.”