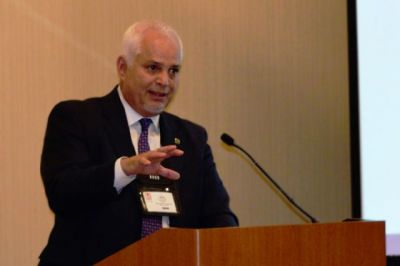 By Joshua Stotlzfus
This story originally appeared in The Record

President Brenneman delivered a keynote address at the Dean’s Forum of the 30th annual Conference of the Hispanic Association of Colleges and Universities (HACU) in San Antonio, Texas on Oct. 11. Brenneman’s speech was titled “Intercultural Transformation of a Midwest Mennonite College: Sí Se Puede!”

In the 30 minute address, Brenneman discussed Goshen College’s transformation from a mostly homogenous makeup of students during the city of Goshen’s ‘sundown town’ history to a college that celebrates improved rates of diversity and intercultural themes. Brenneman explained at the conference that the college’s prediction of becoming a Hispanic-Serving Institution, or HSI, could happen within the next two years.

HSIs are institutions that have committed themselves to assisting first-generation students. If the criteria for HSI are met, these institutions are eligible for federal funding to develop programs that assist first-generation students. One criteria that Goshen College has yet to meet is having “at least a 25 percent Hispanic undergraduate full-time-equivalent student enrollment,” which it is quickly approaching.

“Our Latino student enrollment is 20 percent and international or students of color is 16 percent, so a total of 36 percent of our students are from a non-white background,” Brenneman said. “We expect that within two years we will become an official HSI institution, in addition to having a majority of our students from an intercultural background as well.”

Brenneman said shortly after that they would join only one other institution that has been labeled a HSI in Indiana, Calumet College, which sits just outside of Chicago. Goshen College would be the first HSI in Indiana that is not in an urban area and would also be a part of HACU.

The college has seen a rise in Latino population from 4 to 20 percent in the last decade under President Brenneman. Brenneman discussed several of the decisions and changes made to spur this change. Shortly after Brenneman took office in 2006, the college received a $12.5 million grant to establish what is now the Center for Intercultural and International Education (CIIE) to begin this commitment to attracting a wider array of students and faculty.

“For the first time we wrote a forward-thinking vision statement that would move us from a family-centric institution, where who knows who matters most and policy favors family… mostly for those who are part of the Mennonite family,” he said. “Together we created a statement that read ‘Goshen College is an influential leader in liberal arts education, focusing on international, intercultural and interdisciplinary education and integrated teaching and learning.’”

This statement has been the driving force behind many of the changes implemented in the past 10 years at Goshen College. Some of these changes included implementing new board members to achieve a board of at least one third people of color, lessening restrictions in hiring policies in regards to Mennonite backgrounds, changing scholarship names, offering classes for parents of students, creating a bilingual academic center for coaching and writing, and overhauling core classes in a way that helps students recognize their own identity and how it fits in different intercultural settings.

Brenneman recounted some of his own history, attending Goshen College as a first-generation student when it was still very segregated during the 1970s. At this time, over 90 percent of the students were of Swiss-German descent. This was a college that was also hesitant to allow Dr. Martin Luther King Jr. speak, as there were mixed feelings about his presence.

President Brenneman remarked that this was a product of systemic forces that kept society’s status quo alive, even at Goshen College, and was something that empowered him to focus on the changes he sees happening today.