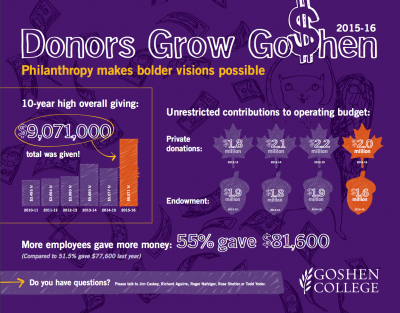 Goshen College continues an upward trend in giving, with donors contributing more than $9 million during the 2015-16 fiscal year.

At the close of the fiscal year on June 30, the Goshen College Fund had received $1,831,888, and overall giving to Goshen College totaled $9,071,399, which combines both designated and unrestricted giving.

“We are very grateful to our generous donors who continue to go above and beyond,” said President Jim Brenneman. “Their generosity is a shining example of their commitment to the college and their belief in the transformative student experience that we offer. Keeping the Goshen College experience affordable for our students is one of our highest priorities.”

The  Goshen College Fund is allocated toward campus needs to better serve students, including capital improvements, employee salaries and student scholarships. Last year Goshen College awarded more than $14 million in aid, helping maintain the affordability of the college, which is routinely listed among the best value private colleges in the Midwest.

All other gifts are designated by donors who wish to give to a specific cause or initiative. In the past year, designated donations totaled $7,239,511.

Donors to Goshen College include alumni, friends, businesses, organizations, churches and foundations. Alumni provided the highest level of financial support with donations totaling $7,515,238 this year. Alumni giving has continued to increase each year since 2009. Employee giving also increased this year, eclipsing last year’s totals in both number of participants and dollars raised.

“Donors make all the difference,” said Vice President for Advancement Jim Caskey. “We simply could not provide for students without giving people expressing themselves through philanthropy.”

The largest donation to the college last year came from alumnus Milo Albrecht ’44, who donated more than $3 million for scholarships through an estate gift following his death in April 2016 at the age of 94.

Although the giving period for 2015-16 has come to a close, the Goshen College Development Office is already working toward its goal for the 2016-17 fiscal year. To contact the office to donate or request more information, visit goshen.edu/give, or call Jim Caskey at (574) 535-7556.