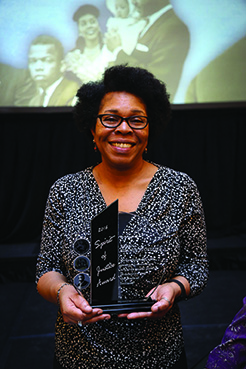 Shands Stoltzfus began teaching at Goshen College in 2002 and teaches courses in race, class and ethnic relations; personal violence and healing; peacemaking; women and gender studies; biblical studies; and transforming conflict and violence. She attended Goshen College and earned a bachelor’s degree in English from Cleveland State University in 1988. In 2001, she earned a master’s degree in biblical studies from Ashland Theological Seminary and is currently a Ph.D. candidate in theology, ethics and contemporary culture at Chicago Theological Seminary.

Shands Stoltzfus previously served as an associate pastor at Lee Heights Community Church in Cleveland, Ohio, as campus pastor at Goshen College, as minister of urban ministries with Mennonite Mission Network, as staff associate for urban peacemaking with Mennonite Conciliation Service and as director of admissions at Anabaptist Mennonite Biblical Seminary. She is a co-founder of the Damascus Road anti-racism education program, now called Roots of Justice Anti-Oppression program, and regularly leads anti-racism workshops. She serves on the steering committee for the Women in Leadership Project and on the Panel on Sexual Abuse Prevention with Mennonite Church USA. She co-authored the book “Set Free: A Journey Toward Solidarity Against Racism” (Herald Press, 2001).

Q: What did receiving the Spirit of Justice Award mean to you?

A: It was an unexpected surprise. When I first found out about it, I really thought it was a practical joke, but why would somebody joke about that? Part of what makes it a little hard to think about is that I do this social justice work – which at this point of my life is primarily teaching – in the context of lots of other people who are doing it. And so it felt good that it was recognized, but just knowing how many people that I collaborate with, how many people who I draw on, I think this is really the recognition of work that I by no means do in isolation. And once I thought about it in that context, it made it easier to sort of roll with.

Q: Who have been mentors to you in helping to see yourself as a person committed to social justice?

A: I want to talk about my home congregation and my mom. My home church, the Lee Heights Community Church in Cleveland, Ohio, is a church that was started in the late 1950s. It is a church that is predominately African- American, but it was a mixed race church. So my youth group from junior high on up through graduating college was this group of black kids, white kids and mixed kids, and that was my normal. And the older I got the more aware I was that this was really, really, really unusual. People just did not do that. But it was my normal. So I lived in that, and we talked about race a lot because it was there. I grew up knowing that there was racism, that racist things happen and we live in this racist context, but somehow in my church community we were fine. We weren’t perfect. It wasn’t that there were never any struggles, or it was this fantasy utopia, but it was like we go to church together, and we’re friends, and we have sleepovers at each other’s houses, and it’s fine. So as I left that community for college and work, I began to realize what a gift I had been given to have been raised in that context. Race wasn’t the only thing we talked about, but because we were people of peace, figuring out how to do that, talking about it and showing up are part of what we do because of our faith commitments. So that was my grounding.

And then there is my mom, who is into the arts, literature, theater. She introduced me to great writers and thinkers, especially African-American writers and thinkers who were writing and thinking about race. And so I just grew up steeped in this tradition of Langston Hughes, other folks from the Harlem Renaissance and the things that they were thinking about and writing about. She was involved in community theater. She got into politics, supporting local council people. She started a publishing company with her friends. So that was just sort of the backdrop of my life. And as I have thought about it, it’s like, wow, she really primed the pump well.

Q: How would you describe your students today when it comes to their commitments to work for justice?

A: I teach about things that lots of people don’t necessarily want to talk about or learn about, and so I am happy when I have a room full of people that are somewhere on a spectrum of eager to talk about this, wanting to know more, wanting to dive into this and at least willing to have this conversation. So that end of the spectrum where the people maybe aren’t so sold on some of the ideas or maybe aren’t sure what this conversation is going to be, I’ve learned not to be afraid of that and feel like I need to be prepared to go to battle or not assume that this is going to be an oppositional relationship. Rather I accept that place and say to students as a whole that you don’t have to agree with me. I’m more interested in people who are able to have a conversation with each other. That seems especially important when people don’t agree about things, don’t have the same experiences or don’t have the same ideas. So I love that I do have those passionate activist students, but I also appreciate the opportunity to have students who are different from that and feel like I have something to share with them as well. I mean this so honestly, GC students are so excellent and I feel very happy to not have some of the experiences I read about on higher ed blogs where faculty don’t have engaged students. 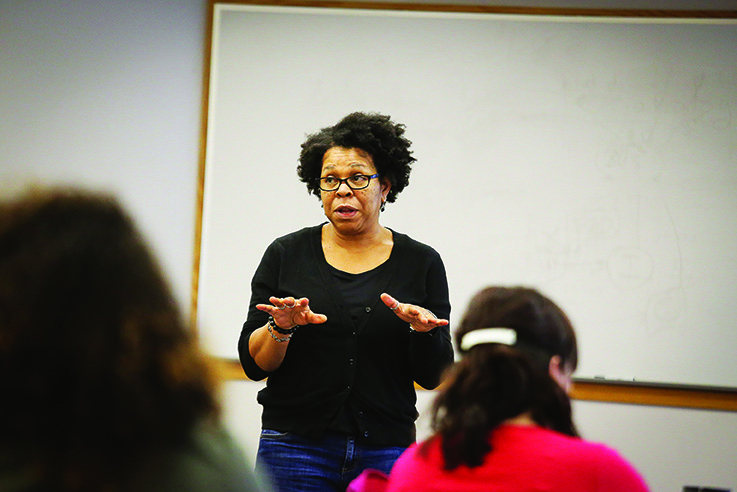 Q: What do you most hope for students to take away from your classes?

A: Language. When I’m teaching about race or gender and their corresponding systems of oppression, one of the things I want everybody to have is language, to be able to say here’s how oppression works, so language about power dynamics and historical context. When you don’t know the history, it’s just baffling, like, “Why can’t people just like each other?” I want them to be able to be people who can talk about things that we don’t do a very good job of talking about. We don’t talk about race in this country very well because, for generations, many of us were socialized to not notice it, to not talk about it. That’s been horrible for us. We can actually talk about race and we’re not going to die. Normalizing those conversations and building up that capacity, that’s a huge amount of what I do.

Q: There is a lot going on nationally in terms of campus activism. How do you see your students engaging that conversation?

A: We are at a moment in history where there is just a lot going on globally and certainly in the country and there is a lot of fodder for activists to grab a hold on. What I am most aware of this academic year is how engaged many of our students have been with lots of that: Black Lives Matter, Title IX, sexual assault, just plain old everyday racism, gender issues. We are in a moment where so many of those things are urgent and someone needs to show up, someone needs to speak. But what all of us need is to figure out that balance of how to sustain the ability to keep showing up over a lifetime of peacemaking. I am really encouraging students – and I tell them I am talking to myself too – that if we really want to be engaged as activist-peacemakers and social justice seekers, we have to equip ourselves to do it for the long haul, because these intense campaigns burn people out.

Q: With all the pain and possible exhaustion, especially as a person of color, how do you remain hopeful and find the energy to continue to face and address injustice?

A: I know that these things feel like they are relentless, like every day there is so much that you hear about or read about. And it is exhausting and it is stressful. You carry those stories around and I think about my kids every time one of these events happens, [in particular] the deaths of unarmed black people in absolutely ordinary situations that any one of us could be in at any time. I think about that. I worry about them. I try not to focus on it. Sometimes it is hard to maintain hope with that reality.

But I show up and I’m still here, so something is propelling this. Probably the biggest part of this is that I have community. [My colleague] community is good, and there is church, but also one of the things I love about the era that we are in is that though there are bad things about social media, for me the good far outweighs the bad. The thing I love about social media is that as a black person in a predominantly white institution and community, I still have daily contact in some way with people of color who are like me. We share information, we commiserate with one another, we celebrate with one another.

And for me, the current iteration of liberation movements – Blacks Lives Matter – is hopeful. What I’ve seen in lots of different ways this last year with what’s going on at different college campuses and what’s happening out on the streets, [is that] people are compelled to keep showing up. And you know, it’s a thoughtful showing up. What is happening to our community is not normal, so we are going to interrupt business as usual. And that feels to me to be very Gospel, because people are dying. To know that large numbers of people are not apathetic feels hopeful.

Q: How does your understanding of the Bible connect with your work?

A: I really do love the Bible, but not in a magic wand kind of way. Rather, look at all these flawed, weird people getting it wrong a lot and doing lots of things we don’t understand because we’re so separated from the culture, language and time period. But we have these stories that are held together by this idea that someone’s there rooting for us, and intervenes and gets us and knows that we mess up, but still loves us and is still present.