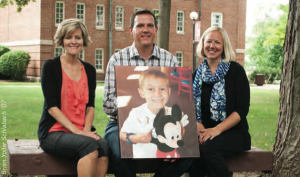 When Isaac Steiner, 7, died on March 6, 2013, after a 21-month struggle with brain cancer, his parents, Rob and Sarah Steiner ’98, were devastated. Though the experience of Isaac’s illness was agonizing, the Steiners found that having meaningful nursing care made a difference.

So as a tribute to their son and his nurses, they recently established a scholarship for Goshen College nursing students in the hope that recipients will provide the same kind of compassionate care that Isaac received.

Isaac, a student at Jefferson Elementary School in Goshen, loved playing with his brothers, Jonah and Eli, had visited 19 states with his family, and enjoyed stories about the triumph of good over evil, including Star Wars, The Hobbit, The Lord of the Rings trilogy, Harry Potter and The Chronicles of Narnia. Even when he was ill, Isaac showed remarkable empathy and compassion for others and often said, “There are no bad people – people are good on the inside.” He also had an exceptional talent with Legos, and continued to put together multi-thousand-piece sets while he was in treatment.

“Legos were his therapy,” Rob said. “They would take him to a different world, away from his sickness.”

During Isaac’s illness, family members, friends and strangers from around the world rallied behind him, forming a group that his parents dubbed Isaac Nation.

Members of Isaac Nation supported Isaac and his family in a multitude of ways, including organizing a 5K benefit run, shaving their heads in solidarity with Isaac, sending gifts to Isaac and his brothers and wearing orange and blue Isaac Nation wristbands, a nod to the Steiners’ favorite football team, the Boise State University Broncos. 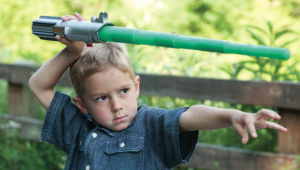 Even employees of the Lego company joined Isaac’s supporters: When they learned of Isaac’s talent with Legos and heard that his family was raising money to purchase an Ultimate Collector’s Edition Star Wars Millennium Falcon Lego set for him, they sent Isaac the first one ever produced – for free – and gave him the honorary designation of Master Model Designer and Builder.

Throughout his struggle with cancer, Isaac received loving care from nurses at Memorial Children’s Hospital in South Bend, Riley Hospital for Children in Indianapolis and Center for Hospice Care in Elkhart. When Isaac awoke from his first surgery in June 2011, he told his parents that he had felt “Jesus and his nurses” with him during the operation.

In Isaac’s memory and to honor the nurses who cared for him, Rob and Sarah established the Isaac R. Steiner Scholarship Endowment Fund, which will award scholarships to students in the Goshen College Nursing Department. The family has a multi-generational connection to Goshen College: in addition to Rob and Sarah, both sets of Isaac’s grandparents, his great-grandparents and great-great- grandfather attended the college, and Isaac might have as well.

The Steiner Scholarship will be given to nursing students entering their senior year who have shown outstanding commitment and kindness to patients during their clinical rotations.

“I hope the recipients of this scholarship continue to be inspired to provide high quality nursing care in their careers, wherever their careers take them,” Sarah said. “I want them to understand that they really have a chance to make a difference in their patients’ lives.”

The first scholarship recipient, who is receiving funds this school year, is Lesley Rutt-Dyck ’14 of Elkhart. Rutt-Dyck’s family and the Steiners attend Belmont Mennonite Church and are close friends, which Rutt-Dyck said makes this scholarship even more meaningful for her.

“Our kids have grown up together at church and we have shared many memories,” she said. “I am humbled and honored to receive such a gift in the name of Isaac and the Steiner family.”

If you are interested in helping to celebrate Isaac’s memory by growing the Isaac R. Steiner Scholarship Endowment Fund, contact the Goshen College Development Office.