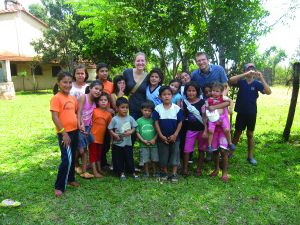 Like many Paraguayan couples, we like to share a wooden cup of mate, sipped through a traditional metal straw, as we prepare for the day. Later we will drink tereré, the chilled version of yerba mate, with neighbors and strangers alike. As two new Peace Corps Volunteers, taking part in these traditions helps us integrate into our new town.

Through each conversation over tereré, we are getting to know the community’s strengths, desired changes and motivated leaders with whom we can partner. Only after these relationships are established can any sustainable development work begin. We see this grassroots model as one of the greatest strengths of the Peace Corps program and a major reason we chose to serve as volunteers.

But we don’t mean to oversimplify the decision that led us to where we are today. It came about after years of watering the seeds planted both by people and experiences from our childhoods. It stems from unique motivations that first intertwined at Goshen College and culminated in our joining Peace Corps. We each have our own story to tell:

ALLISON: My dad’s hands drum the steering wheel in rhythm with Kenny Roger’s “The Gambler.” We’re on our way to my first day of preschool in Kalona, Iowa, and we know all the words. We even have synchronized actions for the chorus. The sounds of the album are familiar and comfortable, just the way I like things.

All is right in the world until I’m dropped off at a building filled with classmates and teachers I’ve never met. I feel frozen in fear, refusing to lift my head to look anyone in the eyes. I hold out hope they won’t notice me if I stand completely still until I get picked up and placed back into the life I know and love.

Then, from the corner of my downcast eye, I see them: dozens of puzzles I’ve never put together, a table to roll marbles through paint to create abstract masterpieces and other kids who like these things too! I leave that day ready for our next class, excited to see which items my new friends will bring to represent the Letter of the Day. Whether I realized it or not, that green carpeted room under the library and the people in it were squeezing their way into my circle of comfort, as would happen so many more times in my life.

ISAIAH: Dancing dolls and eerie masks pursue me throughout my youth, reappearing on a new wall whenever we move homes.
Their exaggerated smiles carved into ancient wood give them a supernatural air. Their presence hints at the existence of a land of people and creatures wholly unknown to me – and it is exciting.

My father was in PAX service in the Congo from 1968 to 1970. Those two years produced a current that ran through his life. He returned not only with the masks but also with Giphende, one of the tribal languages that he and my mother used as a sort of code when we boys were around. We were certain to hear a grunt of muthu tulenge or waya gale if we misbehaved. Nothing pleased dad more, or bored his children more, than dragging out the projector to view his slides from Africa. Despite the dread of a long show, each image that flashed upon the screen contributed to an ever-growing sense of intrigue within me.

Although the situation in the Congo deteriorated in the intervening years, there was always something calling my father back. And finally, 30 years later, he returned to the country where he had served as a PAX-man. He made the journey a final time with my brother six years after that. Even in death, his service in Africa was felt as he requested part of his memorial donated to Africa Inter- Mennonite Mission. The two years my father served overseas had profound and lasting effects on his life, and I knew I also wanted to experience something that powerful. 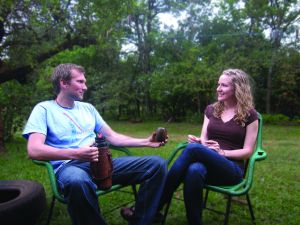 ALLISON: It was an easy choice to study at Goshen College after my high school graduation, but the decision meant saying goodbye
to most of my friends. My new classmates hadn’t experienced the awkwardness of junior high with me and didn’t know what it meant to bleed black and gold like an Iowa Hawkeye. They didn’t know me.

But over the next four years my circle did grow to encompass these strangers who are now among my closest friends – friends who shared less than 200 square feet with me in the dorms, attended campus concerts and bonfires and hymn sings, took road trips and crammed for tests with me. They were beside me as we listened to a guest speaker describe her work as an immigration lawyer, fighting for the rights of the unprotected. Together we heard many stories from elderly couples, a glimmer in their eyes as they reflected on their experiences as volunteers overseas, overwhelmed with hospitality from the community they were supposedly there to help.

ISAIAH: Study-Service Term in the Dominican Republic gave me my first exposure to what my father must have experienced in the Congo. I felt the warmth of a community completely outside my own accepting me into their homes as a son and a brother. Over those three months, I lived inside the culture and began to understand its nuances. It was satisfying to work alongside the Dominican men, rebuilding homes destroyed by Hurricane George. And as I bantered with them in my broken Spanish while laying the cinder blocks ever higher, I knew I’d come seeking this in some form again. What I didn’t know is that one of my SST companions would become my wife, and together we would serve in Paraguay.

ALLISON: During those college years I began to see how GC’s “Culture for Service” motto is far more than words on the cafeteria wall. It is who we are and what we do. We serve. We fight injustice, show love to our neighbors, and build bridges across the gaps of cultures, religions and boundary lines. We step over our own line of comfort to give comfort to another. We give up years of income to walk in someone else’s shoes. And as much fun as I was having inside my own world, a part of me longed to expand my circle once again. The past had taught me that there was so much joy waiting for me just beyond my comfort zone, if only I had courage enough to take the first step.

I’ve always imagined my life painted with adventures like this stint in Paraguay. I just needed to choose a partner who could extend a steady hand of invitation, turning my curiosity to peek outside the lines into the actions needed to make it a reality. I found that in Isaiah.

As we learn to know the people of Paraguay, we feel confident we’re where we should be. Each day brings the adventure of exploring a new culture and each day our lines of comfort are redrawn to encompass more.

EDITOR’S NOTE: Before joining the Peace Corps, Isaiah Goertz was the Web designer/developer for the GC Public Relations Office and Allison Marie (Brenneman) Goertz was an energy education specialist for Goshen Community Schools. We were intrigued by their decision to give up their jobs and home to serve others and asked them to explain their decision in this article for the Bulletin. Read more about their journey at goertzes.wordpress.com.