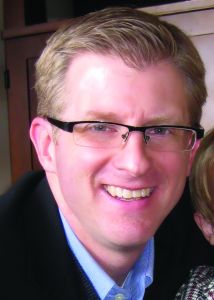 Four years ago, a small seed was planted in Mark Schloneger. The ever-increasing tension of the 2008 presidential election was beginning to take its toll on his spirit, and he began to imagine a way to instead re-focus on God.

“I sensed a need both in myself and in others to remember where we as Christians place our hope,” he said. “We are so easily captivated by the passions of political parties rather than the passion of Jesus. Communion is how Christians remember Christ’s passion and our participation in it.”

The seed took root. At the time, Schloneger ’92 was pastor at Springdale Mennonite Church in Waynesboro, Va., where he organized the first Election Day Communion service on Nov. 4, 2008. It was a positive experience and he wanted to share it.

The idea lay dormant for a while, but last summer, Schloneger accepted a pastoral position at North Goshen Mennonite Church. During his transition, he began to actualize his dreams of growing Election Day Communion beyond his own congregation. With help from Kevin Gasser, a pastor at Staunton Mennonite Church in Virginia, and a lay Episcopalian leader in Michigan named Ben Irwin, he created a website with resources for congregations who wanted to participate in the Election Day Communion Campaign.

As the 2012 presidential election drew closer, the idea gained momentum and spread via social media and word of mouth, and stories about it were featured in the Huffington Post, The Boston Globe, The Christian Century and dozens of other news outlets across the country. Schloneger’s post on CNN.com’s Belief Blog before the election garnered thousands of views and comments.

“Gathering for communion on Election Day seems fitting, for the practice of communion is an inherently political act. It is both a pledge of allegiance to Jesus and a declaration of independence from all other powers making claims on our bodies, minds and souls,” Schloneger wrote for the CNN. com Belief Blog.

On election night, nearly 900 churches, schools and organizations from all 50 states and Washington. D.C., shared the bread and cup. So, now that the seed has bloomed, what’s next for Election Day Communion? “I simply don’t know,” he says.

“From the feedback that I’ve received, I know that churches will continue to have communion services on Election Day in the future whether there is a movement for it or not.”