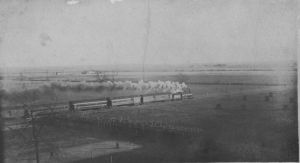 On the first Friday of May 1903, citizens of Goshen met in the city’s council chamber to hear what The Goshen Daily Times described as “a rare chance for Goshen to secure a desirable college.” The local Commercial Exchange had been busily raising money to lure what was then known as the Elkhart Institute to move to the prairie at the south edge of Goshen.

Paramount in the Institute’s choice in favor of the Shoup farm: the existing north-south rail line and proximity to an expanding electric rail commuter network. One benefit of the decision in favor of easy rail access accrued to fledgling Goshen College almost immediately: Stonex, who also represented the legal interests of the Indiana Railway Co., promptly leaned on railway investors to contribute to the $10,000 sum the Goshen business community promised Elkhart Institute in return for choosing to relocate to the Maple City.

The company’s main investor, Arthur Kennedy from Pittsburgh, lamented that “neither I nor any of the stockholders … have as yet had any returns from our large investments,” yet he contributed $1,000 to the goal. In fact, contributions from rail investors represented more than a quarter – perhaps more than half – of the total funds raised by the Commercial Exchange.

Six weeks later, on June 12, chartered trolley cars brought Elkhart Institute personnel and supporters to the newly purchased site. They joined there with a lively array of Goshen’s civic elite to witness the groundbreaking for the GC Administration Building. Contemporary news reports fail to mention whether the festivities were accompanied by the whistle or rattle of a passing train.