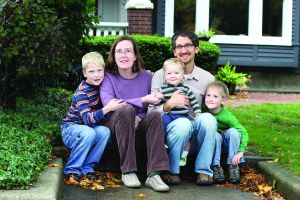 Maybe because her short life took her around the globe several times – from Jerusalem and Bangkok as a child to France and Japan as a young adult – Heidi Siemens-Rhodes ’96 knew a thing or two about saying “hello” and “goodbye.”

Or maybe it was because she had to say early goodbyes to her father Mark in 2005 and to her newborn daughter Willa in 2008 who had Trisomy 18 and lived only minutes.

But in late September 2011, at the age of 37, Heidi faced the ultimate test of her faith: how to respond to news of having incurable metastic melanoma cancer, and how to die well.

This loving mother of three young boys – Theo, 9, Adam, 6, and Ira, 2 – wife to her college sweetheart Mitch Siemens-Rhodes ’96, and pastor for just three years at Assembly Mennonite Church in Goshen, wasted no time. She took trips to visit relatives, friends and places she loved – including in a wheelchair on the Lake Michigan shore just days before she died. She welcomed her mother Jan to move in with her family. She continued attending and being deeply involved in her church, even preaching on Easter Sunday. She read books and recorded her favorite stories for her boys to enjoy later. She deeply loved her sons and husband.

And for the nine months, she wrote her final sermon for the world to read in the form of 90-plus CaringBridge blog posts (www.caringbridge.org/visit/heidisiemensrhodes) with her “aching, clear- eyed observations of her diagnosis and life with cancer,” as her brother Brad Siemens ’99 said at her funeral.

“At a time when we could find no words, Heidi filled the void. … Heidi gave us words – words of lament, words of anger, words of reassurance, words of faith,” said Karl Shelly, her pastoral colleague, during her funeral. “Heidi weaved for us the sacred text of a modern-day psalm.”

Her local and global communities of support absorbed her every word and every lesson of faith in the face of the deepest loss. By the time she died, there were more than 100,000 visits to her blog and 2,100 comments left.

“She didn’t shy away from showing up and talking about it,” said Shelly in an article for Mennonite World Review. “It gave us all permission to enter this conversation together. She was literally dying in front of us for nine months. … She wanted to die as our pastor. And she did.”

On Sunday, June 24, 2012 – her 38th birthday – her family serenaded her with “Happy Birthday”; she received communion; her congregation stood outside her window singing hymns. And then, surrounded by her family, Heidi said her final “goodbye.”