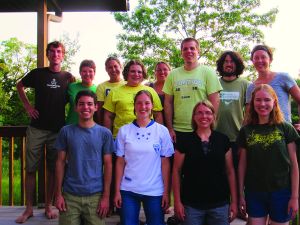 We came from all over: Cleveland, Colorado Springs, Goshen, Moundridge (Kan.), Seattle, State College (Pa.) and Tucson. We met in Washington, Iowa – the place two of our group now call home.

There were 12 of us. Almost all of us had lived in Avon or Aurora house, side by side on College Avenue in Goshen. For most of us, that had been our senior year. We made up a house of five men and a house of eight women, running back and forth to share cookies, play pranks or join a card game. We were only missing three of our group: one who had family commitments, one who was expecting his first child and one (Jeffrey M. Bauman) who had died, on Feb. 26, 2011.

Jeff’s funeral was the last time most of us had seen each other. I think it was that gathering that provided the impetus for this one, although we had certainly talked about a “reunion” even while we were still living together!

Although we did not talk about Jeff much, there were hints of him throughout our long-awaited weekend gathering. When we got out the trusty Taboo game we had spent so many nights playing in the residence hall Connector, we were all set to start before realizing there was no timer. Oh, we remembered, we had never used one. Jeff had always kept time on his stopwatch.

A hymn sing was a must for the weekend, since we had so often sung hymns together (yes, we were nerds, and Mennonites) during our college years. This weekend we sang on the screened-in porch of the building at the camp where we stayed, the crickets adding
to our songs. When we dissolved into laughter at a horribly missed note or some hopelessly outdated lyrics, we remembered that it was Jeff who would keep us together, keep singing – smiling with us,but unwilling to sacrifice the song. That night, I could almost hear his voice soaring out when the tenors took the melody in “We Shall Walk through the Valley in Peace.” 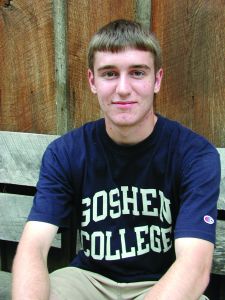 Although we didn’t say so, the weekend was a monument to Jeff, and a monument to each other, to the way our college experiences have shaped the people we have become. Two of us (Laura Neufeld and Amanda Beachy) are pastors, with another (myself) in seminary. Certainly our decisions to follow this track were at least partially spurred on by the late night and middle of the afternoon theological conversations we had in the Aurora living room or at the Avon kitchen table. (Justin Heinzekehr, also part of our group but not at the reunion, has also recently finished a seminary degree.)

Many of us took GC’s “Culture of Service” motto to heart, body and soul, and did voluntary service after graduating. In fact, Kristine Bowman, David Glick and Matthew J. Yoder found long-term jobs at their V.S. placement sites, while Amanda Entz’s service has taken her to LCC International University (formerly Lithuania Christian Fund College).

Others have recently finished master’s programs building on the undergraduate work they did at Goshen: Lauren Hall in nursing and public health and Solomon Fenton-Miller in music composition. And others are using the skills and certificates developed at Goshen (and beyond) for work in the “real world”: Andrea Nussbaum in elementary teaching, Angela Taylor in ASL interpreting, and Benjamin L. Yoder in engineering. (Nathan Horner, another member of our group not able to come, works at a computer consulting business.)

Being in the same place again was wonderful. We spent parts of three days together in a big building at Crooked Creek Christian Camp. It was almost strange how normal it felt, after five years, to be living together again – to see each other in the morning, to sprawl out over each other on couches, to slide sarcastic comments into the conversation, to eat each other’s wonderful cooking, to bump into each other in the kitchen.

Our college years together were not perfect, of course. Like any group of people who live close together, we had drama and disagreement. But this weekend we remembered the good times: pre-May term camping trips, game nights that sometimes lasted until 6 a.m., escapades at the dam, excursions to Chicago, hymn sings in the stairwell and learning to live into who we were becoming.

Five years later, we all still have a lot of becoming to do. But it’s good to know that we also still have one another with us on that journey.

Anita Hooley Yoder graduated in 2007 with an English major. She lives in Cleveland Heights, Ohio.