GOSHEN, Ind. – On Oct. 2, 2006, the world was stunned by the killings of five Amish schoolgirls in a small schoolhouse in Nickel Mines, Pa. Within hours, the Amish community forgave the gunman and rallied around his family. It was an act of compassion and forgiveness so powerful, so unbelievable, and for many, so questionable that it led three authors who know the Amish well to write a book about the role of forgiveness in Amish culture, “Amish Grace: How Forgiveness Transcended Tragedy.”

Those three authors – including Goshen College Professor of History Steve Nolt (pictured below) – are now releasing a new book “The Amish Way: Patient Faith in a Perilous World” (October 2010, Jossey-Bass), the first book ever about Amish spirituality and practice. It is a rare inside look at how Amish Christian beliefs and practices inform every aspect of Amish daily life, and explains, for example, why they shun cars, have no electricity in their homes and stop formal education at grade eight. 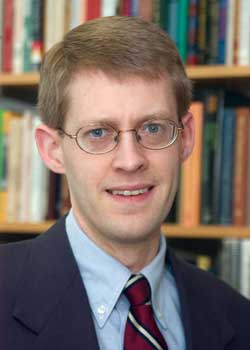 On some levels, the Amish and their countercultural ways offend the typical American’s individualist sensibilities, but this window into Amish religious beliefs may challenge and even change some of those perceptions. After all, the tight-knit Amish community fosters a genuine sense of belonging. Each day, these people choose to live out their core values of submission, obedience and patience, and to adhere to strict community rules, according to the authors.

And the Amish population is growing. According to a 2010 report, the number of Amish in North America has doubled since 1991 to 249,500 people. Indiana is home to 43,710 Amish residents. This is due to large families and the fact that nearly 85 percent of children raised in an Amish community choose to join the Amish church as adults.

“The Amish Way” is the story of the Amish religious experience, told through the Amish cultural lens by three scholars whom the Amish have come to trust as interpreters of their way of life. The authors explain how Amish faith is intertwined with community and commitment, child rearing, home life, material possessions, the natural world, evil and sorrow.

Amish faith is engaging, mind-boggling at times and may prove problematic for some. But it may also serve as a challenge to people of faith, many of whom struggle daily to live out the tenets of their own faith in a world full of distractions. The book explores the complicated question: “Is there anything the Amish can teach the rest of us about living meaningfully in the modern world?”

In a review, Publishers Weekly wrote, “Refreshingly, this study makes a point of focusing on the spiritual and theological aspects of their world rather than simply cataloguing the outward cultural characteristics. Horse-drawn transportation and simple clothing do make their appearances, but they are revealed to be simply incidental to a deeply felt faith rather than something to gawk at.”

The book is written by Nolt; Donald Kraybill, a senior fellow at the Young Center of Elizabethtown (Pa.) College; and David Weaver-Zercher, professor of American religious history at Messiah College in Grantham, Pa. Their prior bestselling book Amish Grace served as the basis for the most-viewed Lifetime movie of all time.

Nolt is the author or coauthor of nine other books, including Amish Grace: How Forgiveness Transcended Tragedy (2007), Mennonites, Amish and the American Civil War (2007) and A History of the Amish (2003). He is also a coauthor of the forthcoming North America volume in the Global Mennonite History Project. A professor of history at Goshen College, he is a leading expert in Mennonite and Amish studies.