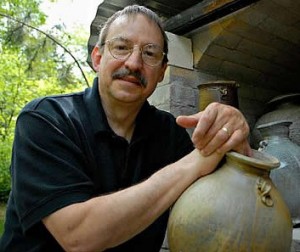 At Goshen, Lehman’s life did not revolve around the potter’s wheel – he took only four art-related courses. The religion major took a first job with Mennonite Board of Missions.

He wanted to make a difference in the world, and his seminary studies led him toward pottery. “I think one of our callings as people of faith is to make life better than it is, wherever we find ourselves,” he said. “If you know how to learn, you can do pretty much whatever you want.”

Determined to live simply, his wife, Jolene Bontrager Lehman ’76, taught school and Lehman put in 90-hour weeks in his studio producing and experimenting. He invented a kiln that saves time in the laborious task of wood-firing pots, has studied with Japanese masters and has graced Ceramics Monthly’s cover several times. He employs other clay artists at his successful studio at Goshen’s Old Bag Factory.

Lehman believes his calling has made a difference – it is a noble thing to bring beauty into the world and to share in the lives of many people.
“To be a part of the togetherness rituals that people share – eating and sustenance – is no small thing.”