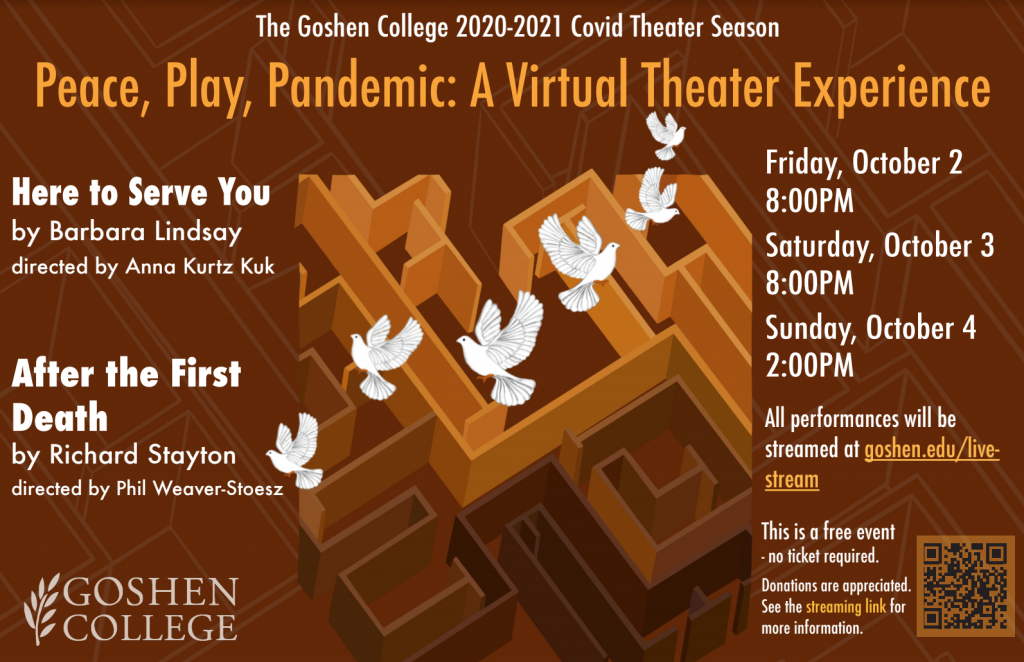 The pandemic has altered how we experience life and how we experience theater. We hope to explore how it impacts both through these short plays as well as its impact on the themes of peace presented. Audiences can attend online – all performances will be streamed.

Students will perform “Here to Serve You” by Barabara Lindsay, which won the award in 2008, and “After the First Death” by Richard Stayton, which won in 1984.

“Here to Serve You” plunges the audience into one very madcap day at an off-kilter airport terminal. In this comedy all it takes is fear, coincidence, and one over-eager security officer to demolish the smooth operations of the airport.

“The play takes place in an airport; I’m especially interested in portraying that location in the age of Covid and exploring how our pandemic world impacts the action of the play,” said Anna Kurtz Kuk, associate professor of theater.

“Here to Serve You” will be directed by Kurtz Kuk and will recorded on the Umble Center stage, with actors adhering to Covid protocols.

“After the First Death” is a short, poetic and painful “bunker” play, set in a post-apocalyptic world following a nuclear war.

“After the First Death” will be directed by Phil Weaver-Stoesz, a 2012 alumnus, conducting rehearsals on Zoom from his home in Arizona.

“Phil has a lot of creative ideas for how to bring this play to life through Zoom,” Kurtz Kuk said. “He has been in touch with the playwright, who is on board for ‘After the First Death’ to be adapted to this format. There currently are plans to make a few Covid-related adjustments to the script.”

“Although both plays seem to be reactions to other events in our history — ‘Here to Serve You’ to the aftermath of 9/11 and ‘After the First Death’ to the threat of the Cold War — they feel very relevant to our current circumstances. I think they will offer an interesting commentary on our current crisis, Covid-19 and the pandemic,” Kurtz Kuk said.

The play will be performed in the fall of 2021.

“Heavenly Light,” which focuses on peaceful resistance against a government branded as a dangerous rebel, is the second of Lindsay’s plays to have won the contest. Lindsay took first place in 2008 with her play, “Here to Serve You.”

Lindsay’s play follows former freedom fighter Lucinda Celeste, who now lives in quiet isolation committed to resistance amid a dangerous opposition: the government. When her life of quiet isolation is threatened, Lucinda must decide whether she will capitulate, or once again take up her fight against the repressive government, a fight that has already cost her everything she loves.

In second place, Edward Einhorn’s “The Meeting,” a modern Vaněk play in the tradition of Václav Havel, examines how we should handle the ghosts of past political wrongdoing.

The Goshen College Peace Play Contest was originally underwritten in 1982 by a grant from the Disciples of Peace, a former Middlebury (Ind.) charitable fellowship, and is now made possible through audience contributions.