Lindsay taught English, creative writing and poetry at Goshen College from 1969-1976. After moving back to his home on Edisto Island, South Carolina, Lindsay returned regularly as the college’s “writer-in-residence,” leading weeklong poetry workshops through 2000. His last visit to Goshen was in May 2017 when he collaborated with two of his former students who are now published poets, Julia Kasdorf ’85 and Jeff Gundy ’75, in an evening of poetry and song.

“Nick Lindsay excelled in teaching creative writing to students who sought out his classes for his colorful personality and passion for words and songs,” said Ervin Beck, professor emeritus of English. “One result is an outstanding generation of graduates who are now practicing, published, award-winning poets and teachers.”

> Read this tribute by former student and poet Jeff Gundy ’75

Aside from teaching, Lindsay would say he was a carpenter and a boat builder. He liked to be remembered for the houses and the 60- and 90-ton trawlers that he built. He contributed to the design of various buildings, including the Edisto Island Serpentarium. He was named “Poet Laureate of Edisto Island.”

“Nick Lindsay excelled in teaching creative writing to students who sought out his classes for his colorful personality and passion for words and songs.”

He was a student of language: French, Russian, Gullah, Spanish and Portuguese, among others. Recently, he was working on his original translation and adaptation of Chekov’s Ivanov. His love of languages and Edisto’s songs and stories are part of what bound him to Edisto Island. 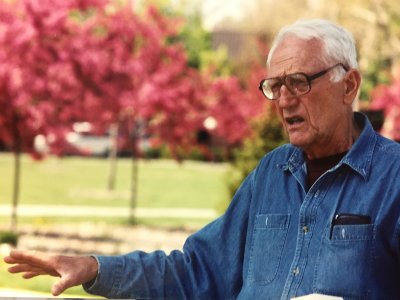 He is preceded in death by his parents, Nicholas Vachel Lindsay and Elizabeth Conner Lindsay; his sister Susan Lindsay Russell; his wife of 70 years and creative muse, Frances DuBose Lindsay; his son, Franklin Thomas Lindsay; and his daughter, Elizabeth Randolph Lindsay.

Interment and a celebration of his life will occur on Edisto Island at a later date. In lieu of flowers send memorial gifts to The Edisto Island Food Pantry at 2164 HWY 174 Edisto Island, SC 29438. Former students and friends may sign the online register book.