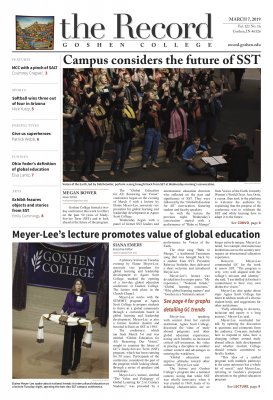 The Indiana Collegiate Press Association (ICPA) named The Record, Goshen College’s student newspaper, “Newspaper of the Year” for the third consecutive time in the college division during an online ceremony that was conducted via Facebook and Twitter on April 29.

More than 20 Goshen College students collected 39 awards at the ICPA’s annual awards ceremony, which was scheduled to be held in Indianapolis. In March, the ICPA canceled the convention and awards ceremony because of the coronavirus pandemic.

“This took much longer than we anticipated, and for that, I’m sorry,” said Erin Gibson, the executive director of ICPA. “Our contest judges are working journalists and journalism educators. Some completed their judging before the situation unraveled. Others had not. and were quickly swept up by coronavirus coverage, the transition to online learning,  and even the loss of a loved one to Covid-19.”

This is the fourth time in five years that The Record, which publishes a weekly print edition and competes against schools across the state with enrollment under 3,000, received the top billing.

In feature writing, Gabe Miller took first for a profile of a GPS-controlled robot that trims the grass at the College Cabin. A judge wrote: “Reading about a lawn mower has never been more entertaining.” Sierra Ross Richer took second for a feature about a student who moved to Texas, leaving “more than 70 Goshen College students without a barber.”

For critics who might question whether The Record has a sense of humor, judges put that to rest by awarding first place to Gabe Miller for an entertainment story ranking the best pranks at the college. Judges suggested 2020 could yet be a year for hijinks: “Not only was this entertaining to read, but serves as a quick and helpful guide.”

“There were so many indicators that this was a standout year for journalism at Goshen College,” said Duane Stoltzfus, professor of communication and adviser to The Record. “The staff members turned out in force for weekly critiques and clearly appreciated one another’s company and talents. These awards from the Indiana Collegiate Press Association are yet another affirmation of a year to remember.”

The Record received 89 points to finish in first; The Andersonian of Anderson University took second, with 39 points; and The Bachelor of Wabash College finished in third, with 24 points.