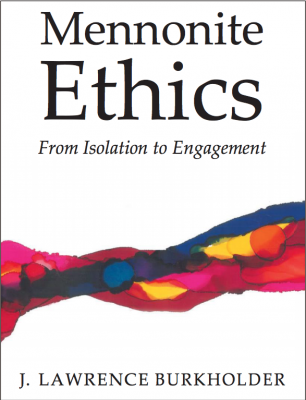 Burkholder served as a professor in Goshen College’s Bible, Religion and Philosophy Department from 1949-1961, and later as president from 1971-1984.

“Over the past few years, I have been editing these volumes and now they appear under one cover,” Friesen said. “Two of the manuscripts were never published and therefore appear in print for the first time.  One, on Mennonite Social Responsibility, was published in 1989, but in a very limited edition (300 copies) and never reprinted.  I edited the works but did not alter them other than add footnotes, make a few corrections on existing footnotes and added a major bibliography. The footnotes were added because Lawrence changed his mind on a number of subjects and whenever I thought that change of perspective was important, I added a footnote explanation.”

In the book, Burkholder explores the strengths and limitations of the stance Mennonites took on nonconformity, which meant withdrawal from society. Volume II expands an analysis of the limitations and proposes a solution whereby Mennonites can continue their ethical stance but become engaged in nonviolent solutions to social problems. Volume III applies the ideas in real-life situations. He concludes that nonviolent action on the local/congregational level is needed to continue our peace witness and resolve tensions in the world, introducing the concept of ambiguity as an ethical value while recognizing that the former absolutes no longer are viable.

“For anyone who cares about the tensions between — and the possible integration of — peace and justice, nonconformity and active engagement, faithfulness and relevance, this text is essential reading,” writes Keith Graber-Miller, professor of Bible, religion and philosophy at Goshen College.

Burkholder was considered a sectarian realist who advocated nonviolent activism in order to engage the faith community with the power structures that guide society and politics. He encouraged the Mennonite church to move beyond its tradition of withdrawal and separatism in order to renew its moribund spirit.

Burkholder assumed that people of faith, and especially Mennonites, should impact social and political structures through nonviolent action, and thereby make those systems more just and peaceful. Any withdrawal of that responsibility was, according to his thinking, a denial of the gospel itself. Efforts to hold onto the principle of a withdrawn or separate community were, for Lawrence, a delusion the Mennonite church could no longer afford.

In his final essay he observed, “It is not enough for churches to be committed to love and justice while ignoring power. The Anabaptist mind is one of paradox. On the one hand, the Anabaptist expressed joy and victory in this world claiming that the possibilities of life are virtually unlimited. Anabaptists were not conscious, as was Luther, of the legacy of original sin which placed a limit to human attainment. They claimed that Jesus came to bring life here and now, which means inexpressible joy and satisfaction. On the other hand, Anabaptists took a sober attitude toward life and at times this developed into a near morbidity…”.

His memoir, Reflections of a Sectarian Realist, was published in 2016 by the Institute of Mennonite Studies. His early career experiences included relief work in China, serving as a Mennonite pastor and Associate Professor of Theology at Goshen Biblical Seminary. Burkholder received his B.A. degree from Goshen College, a Bachelor of Divinity from Gettysburg Theological Seminary, a Master of Arts and a Doctor of Theology (summa cum laude) from Princeton Theological Seminary. Burkholder served as a professor in Goshen College’s Bible, Religion and Philosophy Department from 1949-1961, until he was called to serve as a professor at Harvard Divinity School. While at Harvard, Burkholder also became involved in the civil rights movement, and in 1964 he was arrested during a sit-in at a segregated restaurant in St. Augustine, Florida.

In 1971 Burkholder left the Ivy League to to serve as Goshen College’s 11th president, a post he held until 1984, with the conviction that “Mennonites had something to contribute to the world, and I wanted to be part of it,” he said.