Members of the Goshen College Class of 2018 received undergraduate and graduate degrees after being encouraged by speaker Dr. Kenneth Rutherford, a landmine survivor and removal advocate, to be transformational leaders during the college’s 120th commencement on Sunday, April 29. Rutherford is the director of the Center for International Stabilization and Recovery (CISR) and professor of political science at James Madison University (JMU) in Harrisonburg, Virginia.

The graduates were led in a processional by current and retired faculty into the packed Roman Gingerich Recreation-Fitness Center’s Gunden Gymnasium for the ceremony. 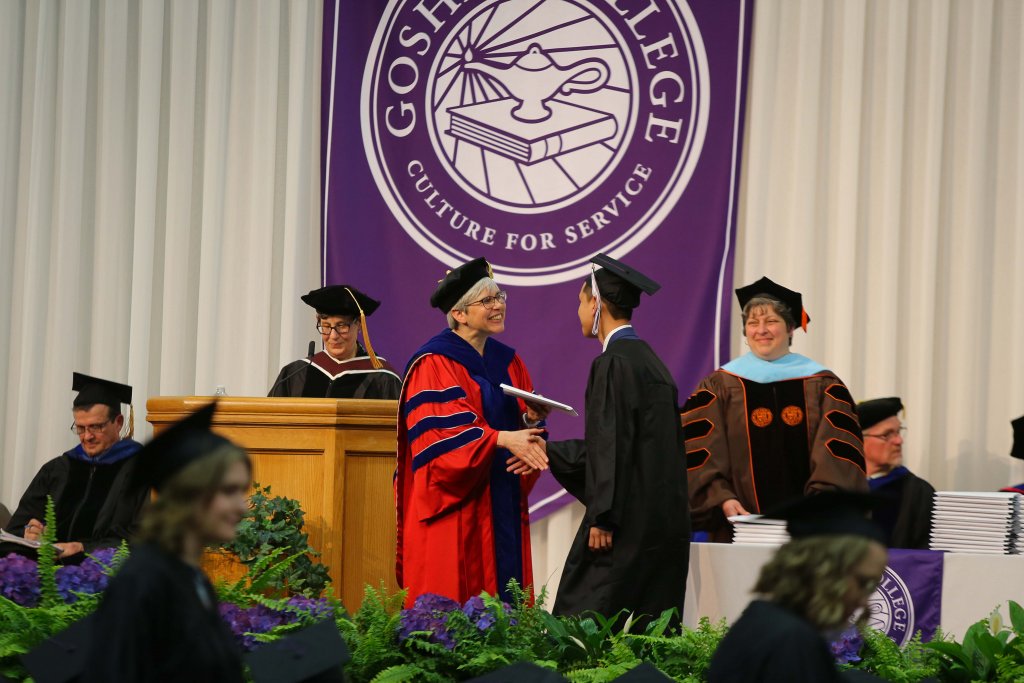 In his commencement address “The Power of Gratitude,” Rutherford shared several life lessons through stories from his life.

His first encouragement was to “clear out the noise.” In 1993, while working for the International Rescue Committee in Somalia, Rutherford’s vehicle struck a landmine, injuring him severely. One leg was amputated to save his life and the second one amputated several years later. The experience “cleared out the noise” and clarified his true goals for his life, which he encouraged the graduates to seek for themselves without experiencing a tragic life event to prompt it.

His second encouragement was for “global engagement” based on his experience working at banning landmines. “When deciding on where you want to go and what you want to do with your life, always choose engagement,” he said. “For me, this means integrate what you believe into every single day of your life. … Don’t remain on the sidelines.”

Finally, he shared about the “power of gratitude” from an experience working with Princess Diana before she died and how she shared a lesson she learned from her father about the importance of saying “thank you.” He said, “I’ve learned and observed that seeds of bitterness can’t take place in a grateful heart.”

Rutherford co-founded Landmine Survivors Network in 1995, which later became Survivor Corps. He accompanied Princess Diana on her last humanitarian mission to visit landmine survivors in Bosnia-Herzegovina in August 1997, only three weeks before her death. Rutherford was a prominent leader in the International Campaign to Ban Landmines, resulting in  the 1997 Mine Ban Treaty, which won the 1997 Nobel Peace Prize.

After the benediction, the faculty lined the main corridor of the Recreation-Fitness Center and applauded the departing seniors. The “applause tunnel” tradition also takes place at the beginning of each academic year to welcome students back to campus. 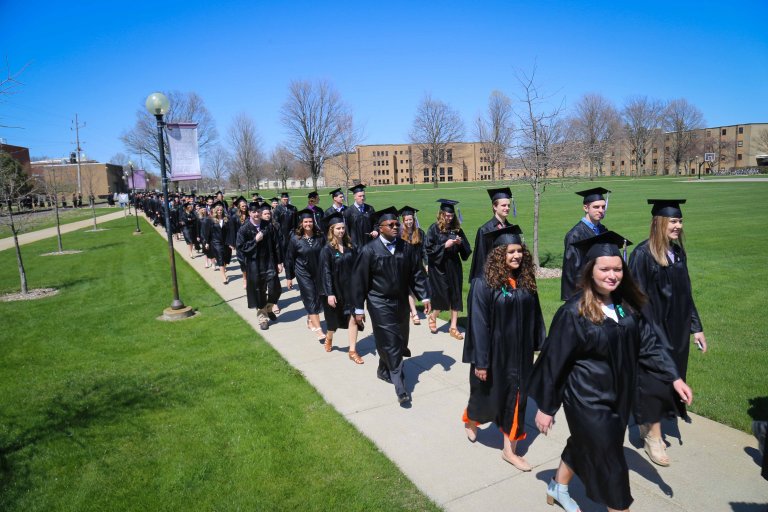 At the baccalaureate worship service in the morning before commencement, President Rebecca Stoltzfus delivered a sermon titled “Cloudscapes,” based on Hebrews 12:1 and Ephesians 3:18-22, and the morning’s theme of “Surrounded by a Great Cloud of Witnesses.” This was Stoltzfus’ first commencement to preside over since she took office on Nov. 1, 2017. (Read the full-text of the prepared speech.)

Stoltzfus noted that clouds are made up of individual water droplets that come together, like each individual person comes together with others to create a community.

“We come together today as the particular cloud of witnesses of your Goshen College journey,” she said. “The ones you have come to know, those you have played with, competed against, flirted with, eaten with, loved, resented, admired, learned alongside.”

Speaking on behalf of the college’s faculty and staff, Stoltzfus told the graduates, “We will always be your curious and enthusiastic cloud of witnesses — eager to see what the world holds for you, and what you hold for the world!”

She concluded, “As you have been served by your ancestors, serve each other. Serve the world.  Serve the seven generations to come.”

Other events during the busy weekend at Goshen College included a Graduate Celebration, which showcased the talent of the Class of 2018, a senior art exhibit, academic department receptions for graduates and their families, a nurse’s pinning ceremony and an evening reception hosted by President Stoltzfus and her husband, Kevin Miller. 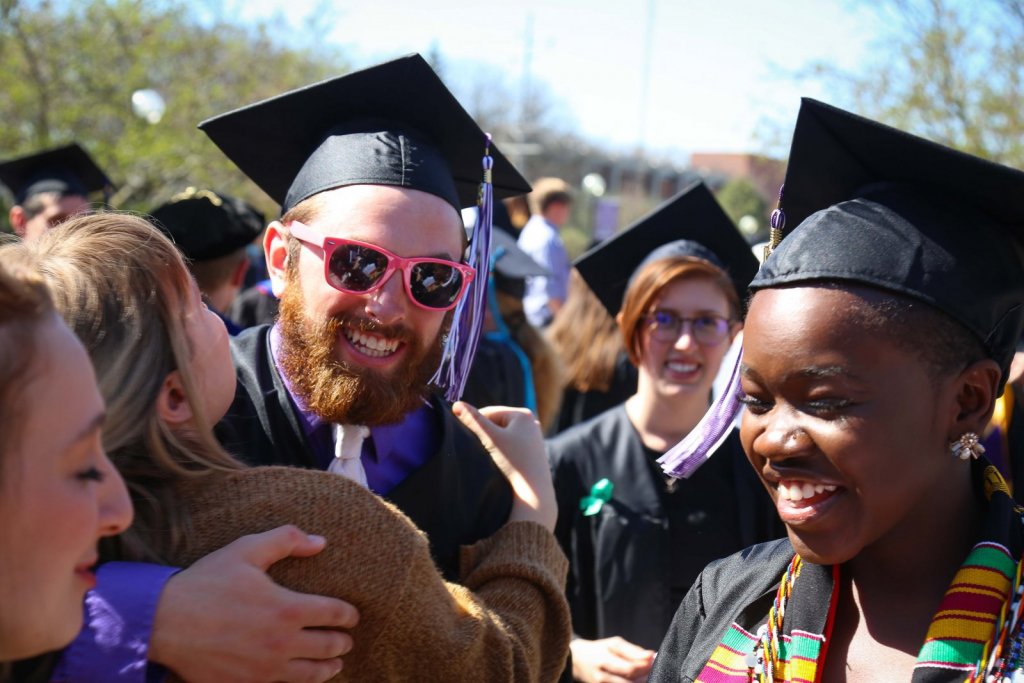