In the lower level of the Harold and Wilma Good Library is Kathryn Aschliman’s “sanctuary” － her office.

Aschliman is a professor emerita of education after having taught in the Laboratory Kindergarten for 34 years, and her office sits across the hall from the Mary Royer Reading Room.

“Can you imagine,” she said, “I have been retired 21 years, and to still have a place on this campus? I mean that’s very special.”

But now, Aschliman has more than just an office on campus. She now has a peace arts collection named after her. The college’s collection of peace materials, which she was instrumental in starting, has been revised, added to and brought into its own space, which is fittingly right beside Aschliman’s office.

During Homecoming Weekend on Saturday, Oct. 7, the Aschliman Peace Arts Collection was officially dedicated. The open house provided people with a chance to honor Aschliman and her life’s work of teaching peace to children.

The Aschliman Peace Arts Collection will be home to books, visual artwork, plays and theater materials/props, curriculum and music appropriate for children between the ages of 4 and 14. The collection is focused on promoting peace and looking at peace from different artistic viewpoints.

The materials in the Aschliman Peace Arts Collection are available to student teachers and those at the college working with children, but it is also available to the public. Members of the community, especially area teachers, have the option to make use of the materials if they are interested.

Her goal was simple: she wanted to teach peace to children.

Aschliman grew up during World War II, and she remembers getting asked on the bus why her brothers didn’t get called into the army, and some people even suggested they paint the family’s barn yellow because they were cowards for not fighting in the war. Those comments stuck with her and were the starting point for her lifelong commitment to peace.

Then in 1952, Aschliman was a part of the Mennonite Colleges’ summer tour in Europe, where they visited bombed out cities, like Heilbronn, Germany. When the group went to London, they visited a playground where the clubhouse had served as the bomb shelter.

“These things really took on a reality,” she said, “which we don’t see around here.”

After graduating from GC, Aschliman was a first grade teacher at Archbold (Ohio) Elementary School, a second and third grade teacher at Clinton Community School in Goshen, and a kindergarten teacher, nursery teacher and assistant director at Bethel Day Nursery in Chicago, but she only spent a few years at each school.

Then in 1962, she joined the education department at Goshen College, as the new teacher and director of the college kindergarten, a position that she held until her retirement in 1996.

During her years at the kindergarten, Aschliman taught nearly 700 kindergarteners, and she helped several hundred GC education students understand early childhood education in a way they wouldn’t have otherwise.

“Kathryn has been a tireless champion of early childhood education,” said Kathy Meyer Reimer, professor of education, “even though culturally, it’s not a very popular thing. But she persists, believes it is important and makes it important.”

For Aschliman, teaching peace in the kindergarten was more of an integrated thing, rather than designating specific time set aside for peace teaching.

“Peace is so multifaceted,” she said. “It’s not just violence and no violence, but how do we live, how do we move, how do we interact in a way that provides a peaceful atmosphere.” 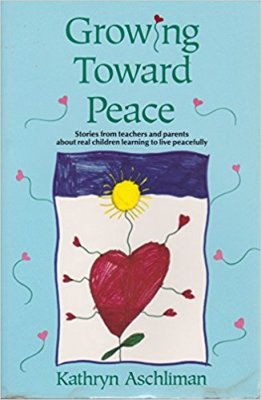 Her passion for exploring how people teach peace to children led her to creating the book “Growing Toward Peace.” She contacted former students of Mary Royer, former professor of education, and invited them to share anecdotal evidence of how they helped children grow towards peace.

The book was pulled together in 1993, and it contains stories from nearly 300 GC alumni about how they are helping children grow in their peace development.

Aschliman takes pride in the things her kindergarten alumni are doing now. The nearly 700 kindergartners she nurtured are scattered across the U.S. and in far-flung parts of the world, many engaged in growing toward peace through a wide range of peace-building activities, though she is quick to add that she only encouraged growth on the foundation that students’ parents had laid.

In 1985, she was the recipient of the “Outstanding Educator in Higher Education” award from the Indiana Association for the Education of Young Children.

While Aschliman was teaching, she was also involved with various early childhood organizations locally, state-wide and nationally, and since retirement, she has gotten even more involved with spreading peace, helping form the Mennonite Early Childhood Network in 2005.

Every week, she participates in an ecumenical peace vigil near the courthouse in downtown Goshen, with the Seniors for Peace, and over the years, she has given nearly 125 presentations on peace in various workshops at early childhood conferences and elsewhere.

Though she’s been retired for 21 years, Aschliman is still very involved at the college. She helped establish the Juanita Lark Welcome Center and the Volunteer Ambassador Program, and she contacts ushers for the Afternoon Sabbatical program as she tries to “stay engaged with the college and its mission.

“She is always happy to be helpful,” Meyer Reimer said, “She is helpful campuswide, not just around early childhood things. She continues to be very invested on campus, even though her specific role in the education department has changed.”

For Aschliman, this new peace arts collection may be named after her, but it’s all about the children and GC’s commitment to peace.

“As a Christ-centered peace institution,” she said, “it’s important to begin with children and to establish following the Prince of Peace at an early age. This [peace arts collection] is an indication that there are resources here to help in those ways, and I’m very thankful.”