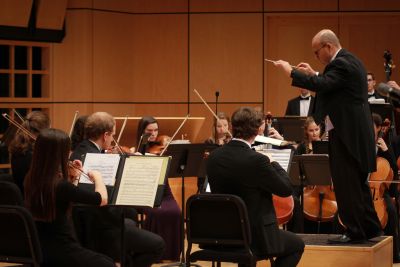 The Goshen College Symphony Orchestra, conducted by José Rocha, will perform for the final time in the 2016-17 concert season on Sunday, April 9, 2017 in Sauder Concert Hall. The concert will begin at 7:30 p.m.

The program, titled “Dances for All Ages,” will consist entirely of orchestral dances. Under the baton of Rocha, the GCSO will perform Edvard Grieg’s Symphonic Dances, Antonín Dvorák’s Slavonic Dances, Alexander Borodin’s Polovetzian Dances, and the Cuban Dances of Ignacio Cervantes.

General admission tickets are $7 for adults, $5 seniors/students. Goshen College faculty, staff, and students are free with ID. Tickets available online at goshen.edu/tickets or by calling (574) 535-7566.

José Rocha, DMA, Associate Professor of Music at Goshen College and director of the Goshen College Symphony Orchestra, is a sought after conductor and cellist in the United States and Mexico. Strongly committed to music education, Dr. Rocha has taught and directed middle school and high school orchestras in Florida, Texas, and Mississippi for the past 15 years. His ensembles consistently earned top honors and awards at regional contests, were recognized as finalists in the TMEA Honor Orchestra Competition, and also declared Winners in the Mark of Excellence National Orchestra Honors Contest. Rocha made his Carnegie Hall Debut leading the Johnston Sinfonia Orchestra in 2014. Recently, Rocha was a guest artist at the FestivalSouth in Mississippi, and the Comunidad Artistica Mexicana in Xalapa, Mexico, where he enjoyed coaching chamber music, teaching master classes, and performing solo and chamber music recitals, Rocha holds a Doctor of Musical Arts degree from the University of Houston, and Bachelor and Master of Music degrees from the University of Florida.