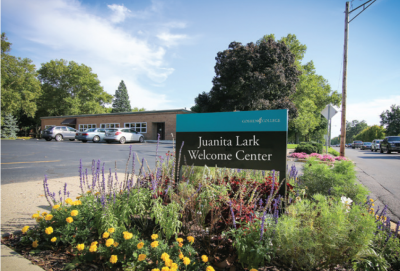 Special Convocation: This Far by Faith: The Life and Witness of Juanita Lark ’43
Date and Time: Friday, Feb. 10, 10 a.m.
Location: Goshen College Church-Chapel
Following the convocation, the Welcome Center will be renamed during a brief dedication ceremony.

>> UPDATE: View photos from the event.

On Friday, Feb. 10 — during Black History Month — Goshen College will officially dedicate the newly-named Juanita Lark Welcome Center in honor of Juanita Jewell Lark, the college’s first African-American graduate in 1943, following a special convocation about her life. While she died in 2008, members of Lark’s family will be in attendance for this event. The public is warmly invited to the convocation and dedication.

“It is a fitting tribute to the groundwork she set for the students who came after her and for those students still to come,” said Goshen College President Jim Brenneman. “Juanita led the way for a more multicultural campus, and it feels fitting for Juanita to be commemorated in the first building guests visit on campus.”

Born in 1921 in Washington, D.C., her family moved in 1923 to a 130-acre farm in Quakertown, Pennsylvania, one of only two African-American families in the area. She was the second of six children of James H. — the first African-American Mennonite bishop — and Rowena Lark.

Lark studied at Howard University and Hesston College before graduating from Goshen College in 1943 with an education major. While at Goshen College, she was a member of the Vesperian Literary Society, A Cappella Chorus, Bible Circle, German Club, Home Economics Club and played as a guard on the champion junior-senior women’s intramural basketball team. Later, her sister Rowena attended for one year and her youngest brother, Alexander, graduated from Goshen College in 1953.

Lark taught for 35 years in the Chicago Public School system, from which she retired in 1980.

Lark and her first husband had two daughters, Dawn and Sharon (who died when she was just a few months old). She later married Robert Bell, and when they retired they built a home on Lake Esquagamah by Palisade, Minnesota, where they participated in the Church of Jesus Christ of Latter-day Saints. Lark’s daughter Dawn married Willie Snoddy and they had five children: Lenora, Celeste, Kim, Todd and Stephanie.

During her life, Lark enjoyed fishing, playing the piano and organ, knitting, macrame, quilting and ceramics.